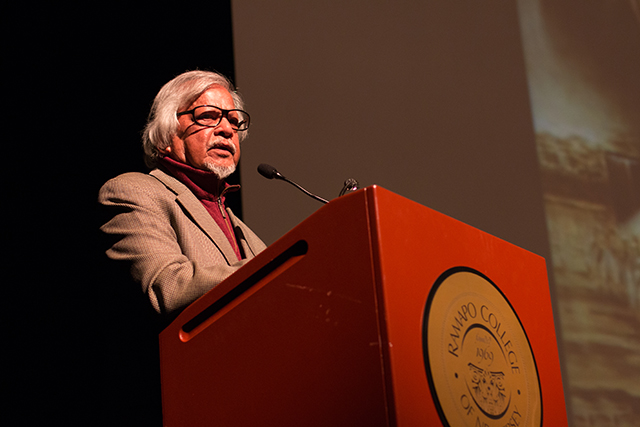 On Wednesday, Ramapo College welcomed Arun Gandhi, grandson of peace activist Mohandas Gandhi, as a guest speaker. Sponsored by the Board of Trustees, the Diversity Action Committee and the Krame Center, Gandhi was brought in to speak for the Ninth Annual Diversity Convocation.

Opening the convocation was Kevin Ng, a student trustee co-chair. Ng spoke of the diversity on campus and the importance it holds for students.

“Ramapo enrolls students from around the state, nation and the world, offering a vibrant academic community to help learn from others with very different perspectives,” said Ng.

“Through such diversity, we make our campus a stronger place to grow and learn,” Mercer spoke, going on to talk about the strife currently facing the Ramapo community. “In recent weeks, our college has been rocked by sexual violence, some of us have been the subject of racist remarks, and these are terrible things to experience.”

When Arun Gandhi took the stage, he addressed the dream of world peace and non-violence — aspirations that his grandfather devoted his life toward.

“We are still very far away from achieving that goal. We still seem to be increasing our prejudices, increasing our hate and all over the world now we can see enormous amounts of violence and inhumanities,” Gandhi said. “It’s shocking how this culture of violence is taking over every aspect of our lives.”

However, Gandhi still seems to have hope for future generations and a world without violence. “In a non-violent society, relationships are built on the four principles of respect, understanding, acceptance and appreciation … Life is about growing upwards and becoming better human beings. And to achieve this, you have to have that commitment to do it.”

He went on to share bits of wisdom given to him by his grandfather, the late Mohandas Gandhi.

“My grandfather used to tell me growing up, he said, ‘Every morning when you get up, the first thing you have to tell yourself is that "I am going to be a better human being today than I was yesterday," and then work towards being a better human being.’”

James Morley, the director of the Krame Center, followed Arun Gandhi and spoke of his grandfather’s influence.

“It’s an honor to follow such a distinguished speaker … I’ve always taught that your grandfather’s thoughts are the deepest form of yoga, not stretching your body, but actually stretching your mind and opening it up to what’s really important in the world, which is not ourselves, but other people,” he said.

Gandhi’s wisdom seemed to reach those in attendance quite clearly.

“I really liked it, I thought what he was talking about, like violence culture, was really big,” said Lauren Ullman. “I think we need someone to show us the way to get through this.”

Junior Kevin Moran also felt that Gandhi’s speech helped him understand the world we live in.

“I’ve gotten a better sense of how hatred affects everyone negatively if it’s not dealt with properly,” Moran said. “He should continue to carry his grandfather’s traditions and spread his legacy to teach people that hatred comes from fear, and that fear is what really separates us from one another.”