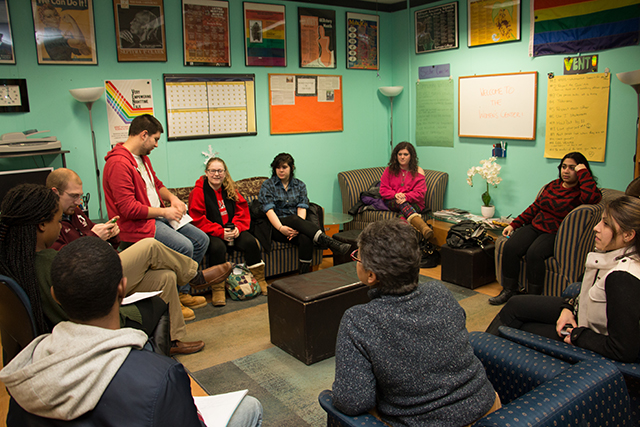 A small group of about 20 students from different races, religions and backgrounds sat down for an hour-long open discussion on Monday about their personal experiences with race – from growing up in different neighborhoods, to their experiences here at Ramapo. This was the first of many bi-weekly events entitled “Conversations About Race,” hosted by the Center for Civic and Community Engagement along with the Women’s Center.

The staff who facilitated the conversation included Coordinator for Civic Engagement and Student Leadership Programs, Brandon Martin and Coordinator for Equity and Diversity Programs, Tanajdza Robinson-McCray. Both believe that it is important for college students to have an outlet to discuss issues regarding race in a comfortable space, full of other students who want to listen and give their own opinion.

“For there to be any change, there has to be dialogue first,” said Martin. “On college campuses we have people who can make those changes. The more you learn about other people the more you can tackle issues from a different lens.”

Toward the end of 2014, America saw a country once again divided by race, with several incidents of police brutality toward black men including the shooting of an unarmed 18-year-old Michael Brown in Ferguson Missouri, and the recorded footage of 43-year-old Staten Island resident Eric Garner, being placed in a chokehold by police until he died. The accused officers, Darren Wilson and Daniel Pantaleo, were never brought up on any charges. These two cases were the most prominent amongst others, and re-opened an all-too-familiar discussion about racial injustice.

“It is a touchy subject,” said Robinson-McCray, “but with things like Michael Brown and Eric Garner it is important to continue the conversation.”

The majority of the students who attended are from small towns and admitted that growing up they had never really discussed race. Freshman Katherine Talian noticed how stratified her high school was and grew a consciousness toward exploring diversity.

“It’s a cool way to meet different types of people and I think it is important that you present your opinion to people who will respect it and maybe challenge it,” says Talian.

Talian believes that as a Caucasian-American it is important for her to never put out of sight the voice of a person of color. Also in attendance at the meeting was freshman Ronika Khanuja who feels it is important to be educated in matters of diversity.

“I was that Indian friend who would make other people more diverse,” said Khanuja. “As an American citizen, it is important for us to want to understand people from different backgrounds, being that we live in such a diverse community.”

Junior Marissa Hatten commented on the potential discomfort with topics of race.

“It is uncomfortable for all parties involved”, said Hatten. “No one wants to speak on behalf of their people, but [conversations about race] is about sharing ideas and educating people who normally wouldn’t talk about this.”

Each week, Robinson-McCray and Martin plan to explore the subject more thoroughly and enlighten students who before were not as culturally aware.

“By the end of this semester our goal is to identify what the issues are, possibly make an action plan and come to a consensus that the people in that room feel like they learned something about other people,” said Martin. “Dialogue is key. We cannot solve issues on inequalities without having first a conversation. Where it takes us from there is not up for me to decide.”