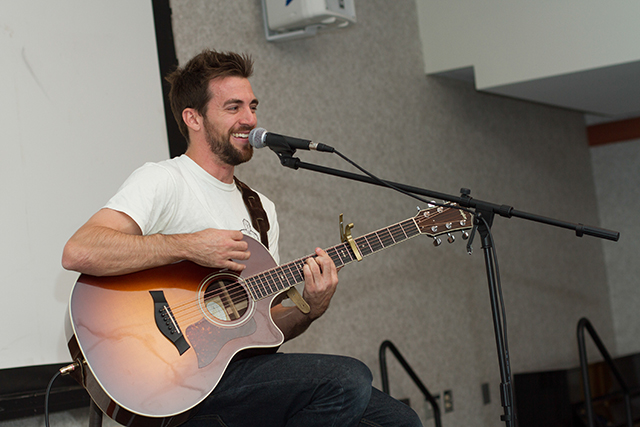 Dual-talented comedian and singer Brian O’Sullivan was the headlining performer of this week’s Tuesday Night Live hosted by the College Programming Board. Free food is usually served at TNL, and this week was no different with a full helping of Chinese.

The opening act was a relatively new Ramapo group known as “Third Floor,” named for their mutual residency on Bischoff Hall’s third floor. The trio performed two original songs as well as covers of “Landslide” by Fleetwood Mac and “Misery Business” by Paramore before turning the mic over to O’Sullivan.

Introducing both the nature of his act and himself, O’Sullivan performed what he called a singing introduction. The Los Angeles native told the audience, through song, about this background while at the same time slipping in jokes.

Much of what the comedian did was parody popular songs by playing the chords on his guitar while replacing the lyrics with something very different from the original. His first parody was of the Miley Cyrus song “Party in the U.S.A." O'Sullivan transformed the free-spirited tune into a story of a bank robbery.

The next song was inspired by pick up lines and was essentially a rapid fire of puns and jokes with a simple tune laid underneath. This was followed by O’Sullivan’s most popular song in which he parodies Taylor Swift’s “We Are Never Ever Getting Back Together,” mocking her style of music as well as her choice in content, which is largely about relationships and subsequent breakups.

While many musicians have a set of songs that they play, O’Sullivan comes prepared with parody and joke songs that are clever and amusing. He played a jingle about the '90s era in which he named dozens of trends, material items and activities that the period is known for.

The most exclusively comedic part of his show was when he simply told a series of jokes that had garnered attention on his Facebook page. Shortly after it was another parody, this time of Macklemore’s “Thrift Shop” with a theme of college procrastination.

His finale was an activity that involved the whole audience: a game of “Mad Libs.” He would ask for words to fulfill the required categories including nouns, adjectives, verbs and other fill-in-the-blank answers. Much of the audience was keen to yell out explicit words in order to spice up the story, which would later be put into the song “Mad World” by Gary Jules. This was the most popular happening of the evening as the crowd was very eager to hear how it would turn out, closing another TNL.