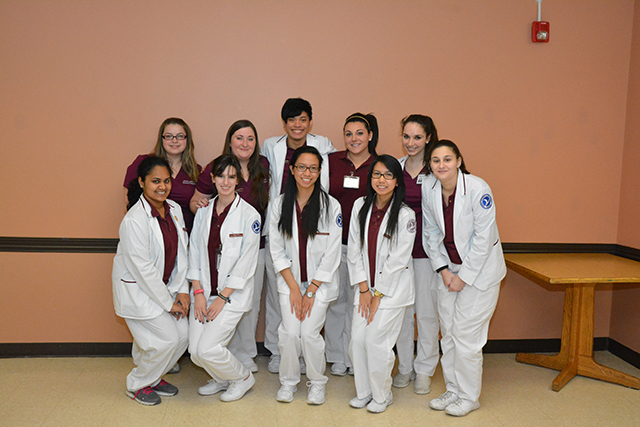 A small group of nursing students are currently undergoing training to provide special care to Holocaust survivors and sufferers of late onset post-traumatic stress disorder at large. This initiative is a result of the joint efforts of Ramapo’s nursing program, the Gross Center for Holocaust and Genocide Studies and Jewish Family Services (JFS) of North Jersey, a nonprofit organization that offers social services to people in need.

“What it entails is nursing students working with professional social workers in conducting intake interviews with clients who are Holocaust survivors of one kind or another,” said Michael Riff,  the director of the Gross Center for Holocaust Genocide Studies. “They’re mostly people who were very young when the Holocaust actually took place, because you only have to do a bit of math to easily ascertain that people need to be in their 80s or 90s to have been even a child during the Holocaust.”

A few years ago, a former board member suggested forming a project where mainly social work and history students would work with people from JFS and talk with Holocaust survivors to learn and record their stories. Although nothing came of it, it inspired Riff to form a similar project that has now come to fruition in the form of a nursing training initiative. Riff approached Kathleen Burke, the assistant dean of nursing programs, about creating a program where nursing students could be trained to help people with late onset post-traumatic stress disorder, specifically Holocaust survivors. Last semester a meeting was set up between Burke, Riff and a number of other school administrators, as well as representatives from JFS and all of the details were worked out.

“Happily, there is a class in the nursing program on community nursing, and so a group of 10 nursing students in that class were constituted as the first group,” said Riff.

This group of nursing students attended an orientation on Feb. 6 at the JFS offices in Wayne, NJ. The orientation was attended by Riff, Burke and Donna Flynn, assistant professor of nursing students, as well as Melanie Lester, the community outreach coordinator for JFS, Leah Kaufman, the executive director of JFS, and Sally Whitmore, a former nurse and Holocaust survivor of the Lodz Ghetto and Auschwitz. Each instructor offered their own perspective on what the nursing students may face in talking with Holocaust survivors, in order to prepare them for this program.

The nursing students also attended a session that JFS organizes called Café Europa, where Holocaust survivors meet and do an activity in order to become more familiar with people they would be talking to. According to senior nursing major Judith Dauer, a participant in this program, the training was a continuation of what they had already been learning at Ramapo.

“The training really wasn't difficult because we have been learning therapeutic communication since we started the nursing program, and we did a mental health and community rotation last semester,” she said. “Working with Holocaust survivors is an interesting experience, however, the training is a continuation of last semesters clinical experience.”

Now, Dauer and her peers have begun visiting the homes of Holocaust survivors and listening to their experiences and trials, with the help of social workers.

“Some of them haven’t opened up at all and if they meet a sympathetic young person, they’re perhaps more likely to do that and also unburden themselves, because sometimes it’s difficult with family,” said Riff.

According to Riff, Holocaust survivors have very rarely been targeted as a group that needs medical attention due to late onset PTSD, even though they very often suffer from it. This may be because Holocaust survivors are harder to locate than other sufferers of PTSD, like veterans. The nursing initiative aims to provide this essential care to Holocaust survivors, however, the skills gained from this program will be applicable to other patients the nursing students may deal with who have PTSD.

“It’s not only Holocaust survivors who would be encompassed by this central program, but other veterans and victims of other genocides,” said Riff.

Riff hopes that the program will be continued in future semesters. While the program may become its own entity, it is more likely that it will continue to be worked into the course, as it was this semester.

“The nursing program is very structured, so they don’t have much time for anything that’s outside of their program, so in all likelihood it will keep to this course,” he said.

This training is one way Ramapo has attempted to broaden the focus of the nursing program, to work in interdisciplinary study to its medical basis.

“Nursing is moving more and more into the community and they’re having to deal with not just medical issues but issues that are complex and have to do with human behavior and the experiences of different groups,” said Riff. “We here at Ramapo College really educate a cohort of nurses who are not only very well trained in the medical, technical part of the profession, but also enjoy a liberal arts education, and they bring to the profession a broader outlook and the ability to see the human dimension outside of actually practicing medicine in a beneficial way.”