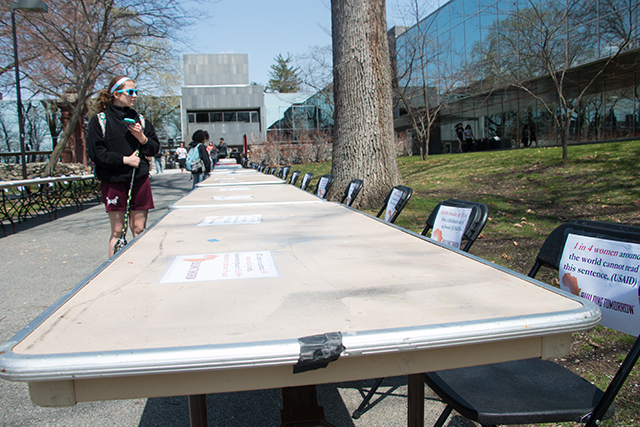 A fairly young organization, Building Tomorrow is a nonprofit that was founded in 2006 with a mission to create a safe, contusive environment for positive learning in the sub-Saharan region of Africa.

In partnership with local chapters in towns, schools and organizations such as the Clinton Initiative, Building Tomorrow has founded 11 academies already and, as of 2015, has five underway.

Building Tomorrow has had a chapter at Ramapo for some time now.

“Our goal is to raise $60,000 in four years to build our own school in Uganda,” stated senior and club president Anthony Darakjy.

“Given the time frame, we started off small,” continued Darakjy. “Starting next fall BT can aim to raise even more money.”

To raise this money, Building Tomorrow reached out to local businesses and on-campus organizations to buy a $52 seat for their event at the Arch on Tuesday. Last week, Building Tomorrow held a fundraising night at Chipotle and raised over $700.

During the event on Tuesday, Building Tomorrow displayed their sponsors on tables next to chairs that were adorned with facts about education in the developing world. Many of Ramapo’s Greek organizations and clubs like SGA bought seats. The latter donated 10 chairs to the cause.

The club was graced with lovely spring weather for the event, which included a DJ and free food, much of it donated by local businesses. People drawn to the event donated money to sign a paper brick, as each dollar provided a brick at a time for building the school.

Perhaps the greatest benefit of the event was raising awareness of the Building Tomorrow club. Freshman Heidi Pilla stumbled across the event on Tuesday.

“I came for CEC credit,” admitted Pilla. “But after learning about this thing, I think I would have joined earlier in the year if I knew about it. They are really doing great work.”

As she was setting up sponsor chairs, club member and freshman Erin McKenna seemed to agree with this sentiment.

“The club kinda slipped under the rug for a while,” said McKenna. “But we had an awesome and really dedicated e-board this year and thanks to them we got a lot of work done.”

But with many of Building Tomorrow’s enthusiastic and hardworking members graduating this year, the club would certainly like to welcome many new members next semester.

“Hopefully with this event today, we broadcast our message to people who are as passionate about this as we are,” McKenna went on. “With a group of passionate people you can educate strangers, speak up and make a change.”