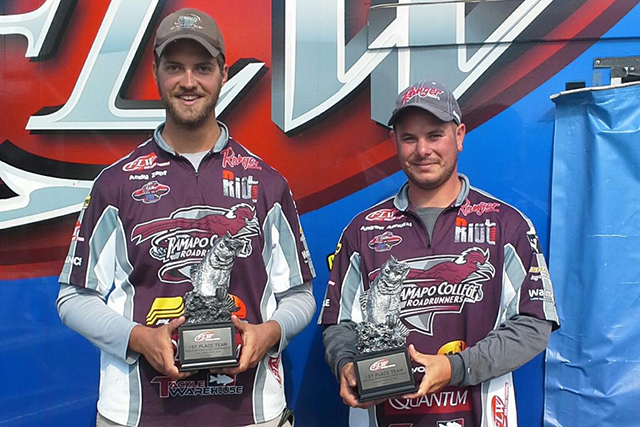 Two members of the Ramapo Bass Fishing Club are moving on to the 2016 College Fishing National Championship after winning the Northern Conference Championship.

Andy Zapf and Andrew Annuzzi took home the conference title when the fish they caught in the tournament weighed in at a combined 19 pounds, 12 ounces.

“I’m just so glad we won,” said Zapf, a senior who has won the conference tournament twice before.

At one point, Zapf and Annuzzi were down 10 pounds behind the leader. They caught three fish by 8:30 a.m. on day one, but did not catch another fish for the rest of the day. Despite being two fish shy of a limit earlier in the tournament, the duo figured that the marina would still be their best bet at qualifying for the National Championship on day two.

They caught a 3-pounder 10 minutes into the second day of fishing, but they did not catch another fish for over two hours, forcing them to change their spot.

“The tide had pulled out, and we ended up catching two more in the marina,” said Zapf. “On our way back to check-in we stopped in a pocket a half-mile from the ramp and were able to cull out a squeaker with just 20 minutes to go.”

Annuzzi said he and Zapf were one of the first teams to weigh in, so watching everyone else weigh in was nerve-wracking.

“They kept us on the stage in the hot seat [during weigh ins],” said Annuzzi, a junior. “We went through the whole field of 15 [teams]. Then we come back and win it from 10 pounds back, it’s crazy.”

The tournament was held in Chesapeake Bay, giving what the duo considered to be something similar to home-field advantage, since they have been fishing in the bay for most of their life.

“We have a lot of past knowledge [of Chesapeake Bay],” said Annuzzi. “I knew the fish would be in that marina because I had caught them in there two weeks prior.”

Annuzzi added that during practice, they quickly caught two fish in the marina, giving them more of an advantage for the conference tournament.

The location of the national championship will not be released for several months, which will make it tough for the duo to practice.

“[The national tournament] is going to be somewhere we’ve never been before,” said Zapf.  “We’ll be looking at a lot of past history.”

Annuzzi added that they will be looking at maps as another order of preparation.

“It’s just a waiting game until they release the information,” said Annuzzi. “From there, you can start doing research. Depending on where it is, it’s going to be tough to practice.”

The duo said that despite the tougher competition, they have high expectations for being crowned national champions.

“There’s a good chance that there will be local teams with a step up, because they know the waters,” said Zapf.

“We’ve fished in a lot of waters before,” said Annuzzi. “Hopefully we can get on a good path and we can win it.”