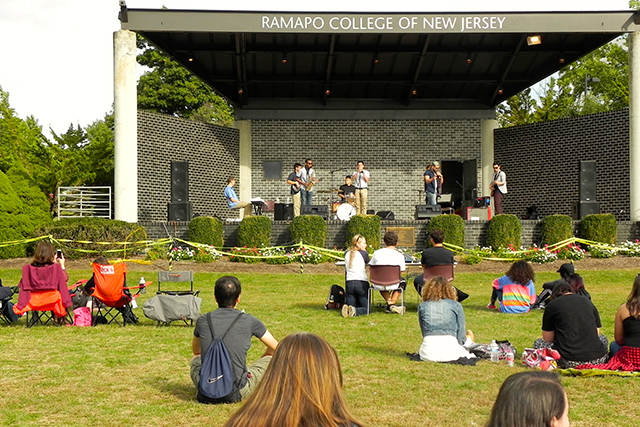 The second annual Welcome to Ramapo concert kicked off Saturday afternoon with a glam rock takeover on the Bandshell lawn. “Roshambo,” donning their signature bold leggings and teased hair, took the stage as the crowd drew close to 60 people.

Described by lead singer Mike Rooney, whose stage name is Lance Burningstone, as “Ramapo’s one and only heavy metal band,” “Roshambo” got the crowd’s attention with covers of '80s hits “Rock You Like a Hurricane” and “We’re Not Gonna Take It,” as well as some racy but entertaining originals.

“Roshambo was definitely the standout; they were crazy," said Alyssa Puccio, member of the Ramapo Music Club and the College Programming Board, both of which helped to coordinate Saturday’s show, alongside the Ramapo Honors Program.

The tone of the concert changed dramatically with follow-up performer “Third Floor.” They first gained the attention of the audience with their original song “Messages” and later with a cover of Paramore’s “Ain’t It Fun.” Third Floor’s set was full of captivating guitar leads, heartfelt lyrics and refreshing vocals.

Momentum continued to increase with a subsequent performance from eight-piece jazz/funk ensemble “The Austin Marcelo Group,” which eventually transitioned into an eclectic set from soloist Brendan Guzman.

As the talent continued to increase, so did the size of the crowd. While this expansion was possibly a result of tables set up to give out free henna tattoos and pizza, it became clear that alternative group “A Boy Named John” was the main attraction, bringing out Ramapo students as well as a small outside group of fans.

Combining a heavier tone with lyrics that verged on spoken word verses, “A Boy Named John” wowed first-time listeners, while still giving older fans a chance to hear some of their favorite originals.

“Last year’s show had a small crowd that kind of fizzled out,” said student Pedro Ortiz. “This crowd was much more consistent, and I think it's because bands that people on campus really enjoy, like ‘Ambary Lake’ and ‘A Boy Named John,' performed.”

However, the Welcome to Ramapo Concert wasn’t just attended by students and fans. Proud parents and family members were seen throughout, smiling and taking pictures as their respective students showcased their various talents.

As the sun began to set behind the Ramapo mountain reservation, Clifton-based “Ambary Lake” closed the show with an alternative rock set that featured hints of progressive and ambient-style fusions.

Just as impressive as the musicianship of “Ambary Lake’s” four members was the singalong that ensued when one of their most well-known singles “Curfews” was performed.

The Welcome to Ramapo concert was successful across the board to those in attendance. Featuring a wide variety of acts that, though different in style, flowed together effortlessly, this student-run concert showcased a clear abundance of talent and, overall, a tangible love for music.