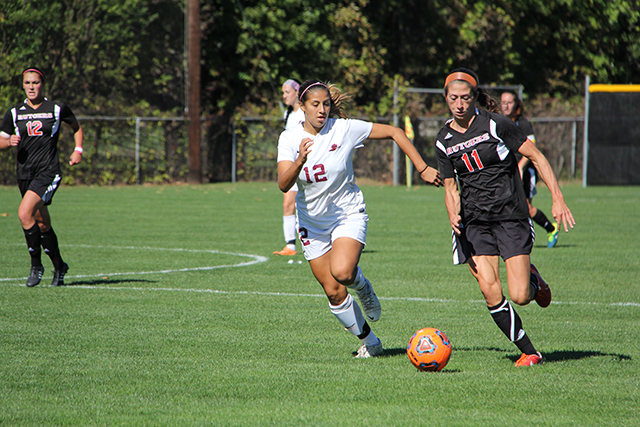 “I guess staying organized in the back,” said Sutherland. “We have a really strong defense so it was easy to stay organized; you have to communicate a lot too.”

The Roadrunners got on the board first and left the entire home crowd in shock as sophomore forward Gabriella DiLiberto scored only the second goal that TCNJ has allowed all season and the first goal scored by a visiting team on TCNJ’s home field this year in the 11th minute of the game. This was DiLiberto’s fourth goal of the season and it was unassisted. Then, TCNJ would get that back 16 seconds later in the 12th minute of the game, as junior defender Marissa Scognamiglio knocked a header past Roadrunner goalkeeper, sophomore Jessica Cusick, for her fourth goal of the season. Sophomore midfielder Jessica Goldman provided the assist, her fourth of the year.

These two teams would go scoreless for 91 straight minutes until sophomore defender Abigail Emmert scored the game winner in the 104th minute of the game and the fourth minute of double overtime, which ended up being the difference in the game. This was Emmert’s first goal of the season, and it was assisted by senior midfielder Taylor Lusardi.

However, the Roadrunners displayed excellent mental toughness in this game, since they were able to hang in there against top-seeded TCNJ on their own home field, which is something that very few teams have been able to do. The Roadrunners played sensationally strong defense throughout the course of the game. Without the strong and aggressive defense, this game could have easily been a blow out since TCNJ outshot Ramapo 24-8.

“The fact that we got that goal in quick, I feel like propelled us into playing even better,” said Kaufman

The Roadrunners return to action on Wednesday as they travel to MSU Soccer Park in Montclair to take on the defending NJAC champions, the Montclair State Red Hawks in Ramapo’s second to last conference game of the regular season, which starts at 7:00 p.m.