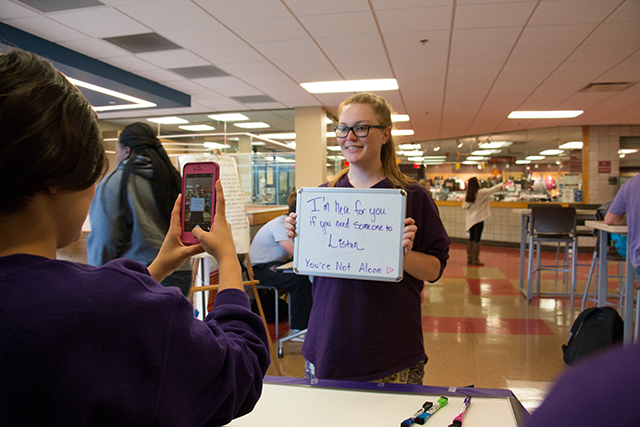 Spirit Day, an annual event held nationally to raise awareness of bullying against members of the LGBTQ community, was recognized by Ramapo students this past Friday on the second floor of the Student Center. Organized by the College’s anti-bullying club, You’re Not Alone, and the Women’s Center, the event was hosted by volunteers of both organizations, who handed out purple ribbons and encouraged passersbys to write messages of encouragement on dry-erase boards.

Dressed in a purple T-shirt, senior YNA member Colleen Kelly discussed the significance of the color: “It represents spirit on the rainbow flag.” Other YNA members who attended were freshman volunteers Nichole Messina and Joe Conciatori, who also wore purple for the occasion. Conciatori was outspoken in regard to the importance of Spirit Day, saying, “I feel this event is important because it raises awareness of bullying on college campuses. Not just here at Ramapo, but across the nation and ultimately the world.”

“You are beautiful, no matter what they say,” Conciatori said, drawing inspiration from the lyrics of Christina Aguilera. “Words can’t bring you down.”

Senior Yovanna Garcia, the Queer Peer Services Coordinator of the Women’s Center, spoke on the history of both YNA and Spirit Day at the College, saying, “For the past two years, we’ve had an anti-bullying club on campus, to raise awareness for college bullying that occurs for people who maybe identify as lesbian, gay, bisexual or transgender … this is an event that happens nationally, so I started doing this event with the Women’s Center, and it’s become a tradition.”

“The unique aspect that I guess I bring to the event is raising the awareness, and being a part of that community,” said Garcia. “I know what it’s like dealing with mental health in relation to college bullying that isn’t addressed by society.”

Situated directly above the Atrium and the Birch Tree Inn, the Spirit Day volunteers’ table was able to attract students making their way both to and from lunch: Conciatori, infectiously enthusiastic, explained the importance of Spirit Day while Garcia and Kelly took pictures of students holding their dry-erase boards adorned with their words of solidarity. According to Garcia, the photographs will most likely become part of a collage outside of the Women’s Center.

Most of the students who passed through the Spirit Day event declined to participate, their faces marked by either indifference or self-consciousness. But there were many students – and alumni – who believed in fighting against the bullying of their targeted peers, wanted to show their support. Senior Greg Mulroy stopped by and shared his thoughts on the pictures being taken.

“I think it’s a great way for people to see that other students are there for them and have positive things to say,” he said.

Sarah Cipolli, a graduate assistant in the Cahill Center and a 2012 graduate of Ramapo, paused at the event as she passed through the Student Center with Kaj Patel, a junior. Both were familiar with Spirit Day – Patel through other students, and Cipolli through the Internet.

The event lasted for an hour, although more students than usual could be seen sporting purple clothing throughout the entire day, proving that Ramapo’s campus is filled with people like Kelly and her fellow volunteers, who celebrated Spirit Day to help people “feel comfortable expressing their identities.”