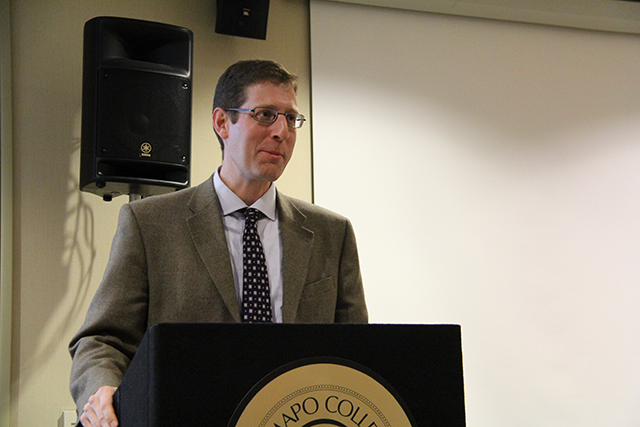 When studying the Holocaust, the subject of humor is not typically discussed. Wednesday night, however, Avinoam Patt, the Philip D. Feltman Professor of History at the University of Hartford’s Maurice Greenberg Center of Judaic Studies, proved that humor, as one of the sole weapons of the Jewish people during and after World War II, has a space in scholarship.

“On first glance, discussing humor in relation to the Holocaust may seem off-key and offensive, but as Dr. Patt will point out in his talk this evening, humor is always a coping mechanism—especially for Jews who were unfortunate enough to be victims of Nazi persecution,” Michael Riff, director of the Gross Center for Holocaust and Genocide Studies, said while introducing Patt.

Sponsored by the Gross Center, Patt’s lecture, “Laughter through Tears: Jewish Humor in the Aftermath of the Holocaust,” focused on humor used by Jews during both the war and its aftermath.

“Jews in post-war Germany and Poland had not only not forgotten how to laugh, but they actively sought out opportunities to laugh even through tears … this kind of humor functioned as one means by which people tried to process the recent traumas of the war, to cope with the enormity of the destruction and to endure what seemed like an endless and unnatural state in Germany after the Holocaust,” Patt said.

Focusing on the humor created during the war first, Patt explained how the Jews used satire as a way of inverting anti-Semitic stereotypes the Nazis created, as well as creating a theme of power imparted to the powerless by means of an inversion of hierarchies.

Citing Steve Lipman, author of “Laughter in Hell: The Use of Laughter during the Holocaust,” Patt gave an example of a joke, popular in Berlin during the 1930s. The joke involves a Jewish man and woman sitting in a coffee house in Berlin. As Patt explained it, the woman notices the man is reading “Der Stürmer,” an extremely anti-Semitic newspaper, and questions why he would do such a thing. He replies that when he used to read the Jewish newspapers, all he learned about were pogroms and riots and assimilation, but now that he read “Der Stürmer,” he could see much more. The man explains that by reading it, he could see that Jews controlled all the banks, dominated the arts and were on the verge of taking over the world—and that it made him feel better. This obvious inversion of the stereotypes was a popular type of comedy utilized by the Jews at the time.

“Humor helped survivors maintain a sense of psychological advantage while also serving as an outlet for subversive observation on the state of Jewish life in post-war Germany,” Patt said, encouraging the audience to picture what it would be like be Jewish and live in Germany immediately following the war.

In the segment of his presentation which focused upon post-war humor, Patt described how after the war, survivors of the holocaust were stuck in Europe for a few years, a period of history rarely discussed due to its transitional nature. Many survivors, he explained, went on to live in displaced persons camps (DP camps) and it is in these camps that culture and humor emerged.

“In this in-between period what they ended up creating was this very fascinating, vibrant culture which sort of rebuilt their lives during the aftermath of the war while they were waiting to go somewhere else,” Patt said.

This culture included well documented satire in the form of newspapers, songs, illustrations and theatrical productions. He explained how the satire adopted during this time even went on to effect certain aspects Jewish holidays such as Purim and Passover, empathizing the impact humor had on the Jewish culture in general.

“I think it was important because in general, using humor as a coping mechanism is something that’s used by a lot of groups even today—like refugee groups…so when dealing with trauma a lot of survivors will try to use whatever they can to normalize their lives again and humor is one of the ways to do that,” Marianne Retif, senior, said.