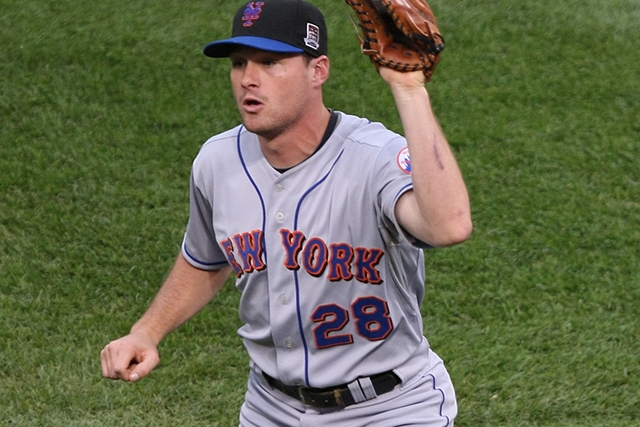 All the hype and excitement that radiated from the New York Mets’ faithful fans this postseason quickly fell to silent murmurs and sighs this past Sunday, as the Kansas City Royals defeated the team in order to be crowned 2015 World Series Champions.

As the Royals hoisted the World Series trophy in Citi Field, one cannot help but look back on all the “what-if” moments of the series. The Mets chose the worst time to live up to their past, as they were plagued by costly errors and lack of clutch performance with everything on the line.

“[The Mets players’] youth just killed us,” said men’s basketball head coach Chuck McBreen, “We led in the ninth twice and eighth once and lost all three. The Royals were more experienced and confident, and it showed throughout the series.”

In the final game, the Mets once again saw themselves with the lead in the late innings.  Up 2-0 in the ninth with Mets’ hurler Matt Harvey trying to finish a complete game shutout and bring the series back to Kansas City, the Royals notched together a little fire that spread two runs across their end of the scoreboard. The play of the night was when Eric Hosmer stopped the hearts of all watching, as his mad dash toward home forced Lucas Duda to throw a wild laser from first base, which got away from catcher Travis d’Arnaud. The game was then tied at two, and after securing seven come-from-behind victories, including two in this series alone, the Royals were the frontrunners to chalk this game up in the win column.

The Royals made it eight come-from-behind wins in this postseason, after they scored five runs in the 12th, awarding them the title of World Champions. This scrappy team showed all of baseball that fundamentals and giving it your all for nine innings wins ball games.

“I think we just ran into the better team,” said junior Jimbo Long, who was at Game 4 and Game 5 of the series. “They fought back every game no matter the deficit. They are the most resilient team I’ve seen in a while.”

Game 1 set the tone for the Royals, after Jeurys Familia’s quick pitch didn’t fool Alex Gordon, who took the 97-mile-per-hour heater over the center field wall. This tied the game that would eventually end in a 3-2 Royals win in the 14th inning.

The same implosion was found in Game 4 when the Mets blew a 3-2 lead in the eighth inning, letting up three runs that would give the Royals their third win of the series.

However, Mets fans need not worry. The Mets are amazin’ once again, and they are here to stay.

The future is bright for this squad and that is something Mets fans haven’t heard in quite a while. The starting five for the Mets next year will be Matt Harvey, Jacob deGrom, Noah Syndergaard, Steven Matz and Zack Wheeler. Harvey is the oldest of them all at 26 years old. If healthy, this could possibly be the best rotation in the MLB for years to come. Along with a few pickups for run support, there is no doubt the Mets will be sniffing the postseason in the future.

“Our pitching staff was one of the best in the MLB, and we came together and got hot at the right time,” said Long. “It was a lot of fun to watch the team progress all year and bring the magic back to Queens.”

Like the fabled phoenix, the New York Mets have been reborn from the ashes of the old teams we are used to seeing in Queens. The scoreboard in this World Series may show a loss for the Mets, but it rekindled the flame that fans have been waiting for since 1986 and one that will keep burning for years to come.