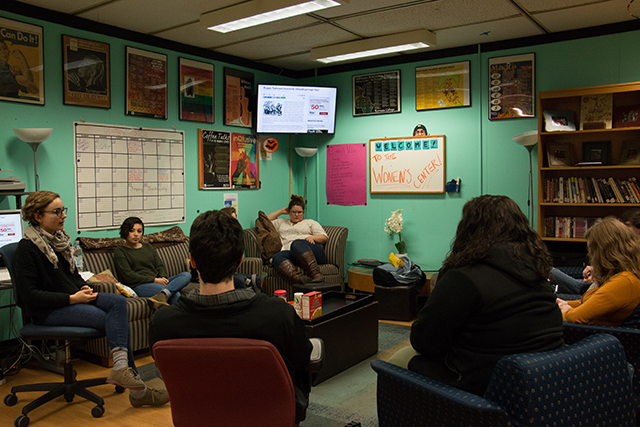 On the second floor of the C-wing, the Ramapo Women’s Center holds their Coffee Talks. These discussions take place in a comfortable atmosphere where students lounge in chairs and debate current issues. This week’s topic was relevant, but has roots that date back to when the Pilgrims came over on the Mayflower – this week’s talk was “The Truth Behind Thanksgiving.”

Before Halloween the talk focused on cultural appropriation in an attempt to educate students on the consequences of dressing up as offensive caricatures of other cultures. The next Coffee Talk, on Dec. 2, will focus on consumerism in America: a prevalent issue with Black Friday and Christmas shopping around the corner.

“Well, every two weeks we get together for our Coffee Talks,” said sophomore event host Grace Maute. “The holiday season provides us with a lot of topics for Coffee Talks, because they are practically tailored for discussion.”

In attendance were regulars of the Women’s Center and staff but also new faces – students who had heard about the event and were interested or were assigned to attend for class. The good mixture made for a stimulating conversation.

Maute got the ball rolling by asking the group about the simplistic, elementary view of Thanksgiving. Students piped in with the many tropes of the holiday: the friendly Indians, pious Pilgrim settlers and a very sanitized story of friendship and benevolence.

Yet all in attendance spoke of these clichés with sarcasm and eye rolls. Their educations in high school and here at Ramapo have taught them otherwise.

The area the Pilgrims settled in, the Massachusetts area, was home to the Algonquin people. The Algonquin were composed of many different tribal confederacies and dialects, not one large homogenous group. The tribe that the Puritans first met were the Wampanoag. They were vulnerable to stronger neighboring tribes such as the Narragansett.

The Native Americans did not just reach out to the starving Pilgrims out of simple generosity. The Wampanoag were motivated to negotiate with the strange newcomers, as they knew they came from a powerful people who could provide protection.

With the aid of Squanto, who had previously been enslaved by Europeans, an alliance of mutual reliance was established with the English settlers. The natives assisted the settlers with farming and provided defense from other Algonquin.

The Wampanoag even gave them the land that became known as Plymouth (there was no rock). The Pilgrims relied on the Wampanoag for survival. Cultural exchange began between the two peoples, who famously shared the first “Thanksgiving feast” in the New World, but it was not a big affair and probably only consisted of fish and potatoes.

Over time the nature of this relationship changed. The settlers’ numbers began to grow and soon they did not need the assistance of tribes like the Wampanoag. The Europeans began to take advantage of the relationship.

Eventually the next generation of European settlers and Native Americans would engage in a war, one that did not end well for the Algonquin. This conflict is often pointed to as the beginning of a harrowing history for Native Americans – one of conquest and infringed rights. The question the Coffee Talk asked was: is it appropriate then to commemorate these events with a whitewashed holiday?

Some said yes ­– it was important to continue the conversation about how settlers displaced Native Americans.

“I am Jewish, and I feel the same is to be said with the Holocaust,” said freshman Rebecca Sorkin. “I have to stand up to make sure it’s remembered. When you have that heritage like we do, you have a responsibility to it.”

To try and improve the situation, sophomore Domenica LaRocco suggested that the Canadian version of the holiday be adopted. In Canada, their Thanksgiving is not tied to their national origin story or any certain history.

Overall, the Coffee Talk sparked a stimulating analysis of one of America’s most popular holidays and got students talking about the true history of Thanksgiving.