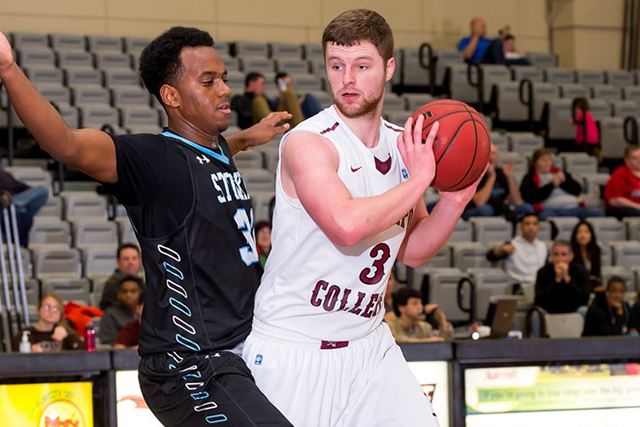 Before the men’s basketball season began, coaches from the NJAC voted Ramapo to be the dark horse -– the team that would wreak havoc within the NJAC.

That prediction may be coming to fruition, as the squad bounced back from their loss against Rowan last Wednesday with a big win over Montclair State on Saturday.

“There’s no runaway in this conference,” said sophomore forward and co-captain Tom Bonacum. “So for us, it’s all about finishing these games and coming away with W’s.”

Bonacum was a force at Montclair where his performance was highlighted with a perfect 5-5 from behind the arc, 9-13 overall from the field and 6-7 from the charity stripe for a grand total of 29 points, a career high. His performance received high praise from head coach Chuck McBreen, who knows that he needs this production from his captain if the Roadrunners want to reach the NJAC Playoff Tournament for the first time in three years.

“Tommy is one of the best players in the NJAC because of his well-rounded game,” said McBreen. “I told him what happens in these next five games will rely heavily on you.”

The burden doesn’t rest on Bonacum’s shoulders only, but rather, a team capable of putting 11 or 12 men on the court on any given night. At Montclair, 12 men saw the floor with three in double-digit points. Rallying off of Bonacum’s stellar night, Chris Moseley dropped 19 points shooting 67 percent from the field, while senior forward and co-captain, Frank Nock added 10 more points to his tally along with four assists.

Other notable performances in this matchup came from the two guards, Josh Ford and Jimbo Long. Both playing 30-plus minutes, Ford finished with seven points and four assists. Long, who has been knocking down threes of late, added two more on three attempts, finishing with six points. However, the starting point guard would like to focus more on the assist column, where he racked up a team high six assists.

“Being unselfish is to do anything necessary for your teammates and coaches to accomplish our main goal as a team,” said Long. “And that’s what has happened in these last couple games.”

A total team effort is a necessity in the Roadrunner’s next matchup against New Jersey City University, who beat the team by 14 back in December. The Gothic Knights stud, Chinwe Wosu, had his season’s best performance, finishing with 24 points and 18 rebounds. To McBreen, stopping Wosu means halting the NJCU offense.

“Wosu had 24 and 18, something I’ve never seen before,” said McBreen. “We have to match their toughness and physicality…we really need to bring it.”

The Roadrunners won an overtime thriller last night over NJCU by the score of 80-73, despite trailing by 15 at one point.

The Roadrunners will travel to Stockton University on Saturday at 1 p.m. to try and take down another powerhouse in the NJAC, the Ospreys.