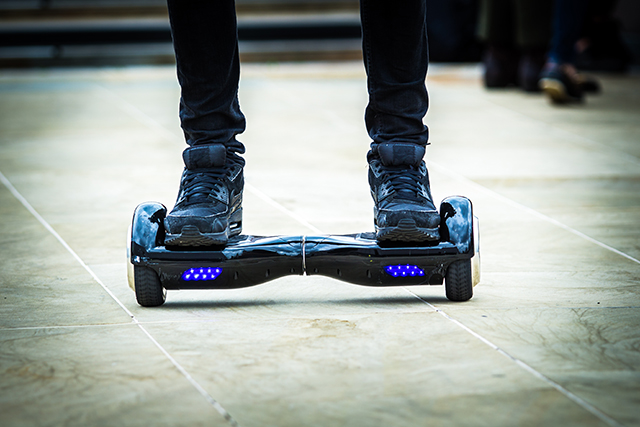 As of this semester, hoverboards have been added to the list of items banned on campus. Ramapo is not alone in this move – across the nation, schools such as Boston College, Butler University and Quinnipiac University have also banned hoverboards, creating a list of more than 30 colleges who have made the move on their campuses, according to USA Today. The bans and partial bans started last December and the trend quickly spread to many colleges.

The initial recommendation for banning hoverboards at Ramapo came from the Health and Safety Committee. The committee recommended that the College restrict the use and charging of the hoverboards. However, the final decision to restrict hoverboards came from Student Affairs and the dean of students' office, and was eventually conveyed to all students via email.

“Hoverboards were banned because the College is committed to upholding a safe campus,” Melissa Van der Wall, dean of students, said, explaining why hoverboards had been banned and what hazards they pose to the Ramapo community.

“Injuries due to hoverboards was the main cause the College had to be concerned about their use on campus” Van der Wall said, referring to incidents that have been reported in the news, such as hoverboards catching fire while charging, among others.

As for hoverboard incidents at Ramapo, none have been reported. Calling the devices "hoverboards" is a misnomer. The balance-board-type devices are propelled using battery power that drives two wheels. A user controls momentum by shifting body weight.

“There have not been any incidents of harm, reported to me, that would have prompted this ban. The ban is the College’s response from recommendations that came from the College’s Health and Safety Committee and the New Jersey Division of Fire Safety,” Van der Wall stated in an email.

Students’ reaction to the banning of hoverboards on campus remains mixed.

“I think it was a good thing that they banned hoverboards; they’re dangerous. They can blow up and because of that they pose a hazard to those riding them and those around people who are riding them,” Noelle Patire, a junior, said.

Some students, however, have voiced their opposition to the ban.

“I don’t see why they banned them. A lot of things can cause harm but a lot of things are not banned. Scooters can be dangerous, as well as skateboards and bikes, yet none of those things are banned,” freshman Danil Baksheev said.

"I am kind of against the ban,” freshman Jazmine Garcia, said. “I don't think that it is necessarily fair. The responsibility should fall upon the person who owns it to take care of it and use it responsibly to make sure it doesn't, for example, catch on fire. I think the ban is wrong."

Public Safety joins the Student Affairs department in asking that any student with a hoverboard on campus remove it immediately. As a consequence, any hoverboards found in Residence Halls will be confiscated and the owner may face disciplinary action.