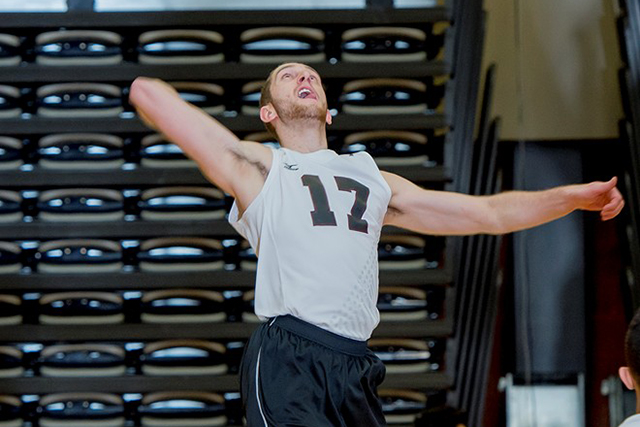 The Roadrunners’ first win of the day came from the College of Mount Saint Vincent. The Roadrunners swept them 25-8, 25-20, 25-17. Junior outside hitter Connor Brandow led the team in kills with nine, and with freshman outside hitter Jordan Elam right behind him with eight. Brandow also tallied three aces against the Dolphins, while sophomore outside hitter Patrick Wixted tallied two aces in the match. Freshman setter Mikhael Erushalimski helped the team with a game high 28 assists, while sophomore outside hitter Spencer Shickora led the team on defense with nine digs. Ramapo hit .369 with 33 kills on 65 attempts and only nine errors through the match.

“Coach Kevin Rodgers said to play hard every set, and that is what we did as a team against Mount Saint Vincent,” said Elam.

In the second sweep of the day, the Roadrunners won 25-20, 25-20, 25-16. Sophomore outside hitter Justin Feigeles led the team with 13 kills, hitting .409 with 22 attempts and only four errors. Wixted and freshman outside hitter Paul Close each notched seven kills, as the team combined for 38 kills on 70 attempts with just 11 errors, hitting .386. Erumshalimski had 28 assists and also picked up a team-leading eight digs.

When asked about the matches, Rodgers only had positive things to say.

“Playing two matches in one day can have an effect on our play, but we knew that we had these matches for months,” Rodgers said. “Our guys have worked hard and stayed in shape since the fall, so they can compete at their highest level during these double headers.”

Even though the competition was tough, Rodgers knew exactly how to keep an advantage over the other teams.

“In the match, NJCU almost had the same amount of hitting attempts as we did, but the difference was, we had 11 more kills than them and had 3 less hitting errors,” he said. “Against Mount Saint Vincent, we beat them in almost every statistical category. Our attack percentage was the key difference, with us hitting over .350, while they had more errors than kills.”

Elam said he wanted “to leave this game ranked] No. 1 in the Skyline Conference.”

Rodgers also highlighted the matches with a few clutch performances.

“Our key player against Mount Saint Vincent was Connor Brandow and against NJCU it was Justin Feigeles,” Rodgers said. “Both players had a high hitting percentage with hardly any errors and helped our team earn both wins.“

Elam believes the reason behind their conference success is “good defense, good communication with teammates and good coaching. Good communication between the players and Coach can keep an eye on who is improving during the season.”

“The last two years they’ve finished first in conference and we’ve come in second,” Rodgers said. “Last year, Kean graduated five of their seven starters. They still have a lot of talent, but we know that we have the ability to beat them. We want sole possession of the number one spot and we’re going to work our butts off to earn it.”

The Roadrunners lost to the Kean Cougars last night in four sets. It was their first conference loss of the season.

The Roadrunners return to action on Feb. 28 against also undefeated conference rival Kean University, a team who has been a thorn in Ramapo’s side for years.