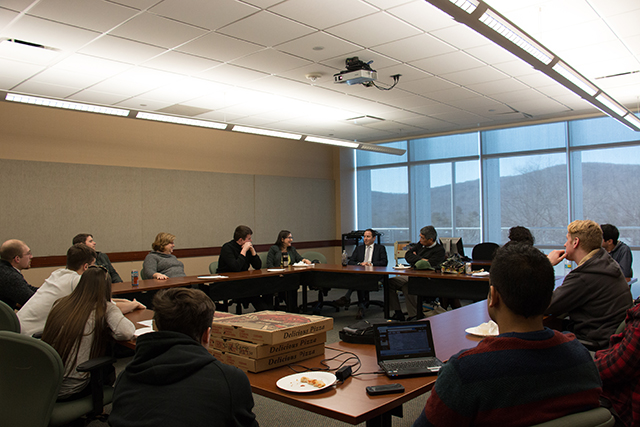 The first Supreme Court of the United States, also known as SCOTUS, Discussion Series of the semester was held on Monday. The topic was the Friedrichs v. California Teachers Association et. al case, focusing on labor, unions and the First Amendment.

The SCOTUS Discussion Series holds 10 weekly forums during the semester to encourage meaningful, hour-long debates between students interested in cases handled by the Supreme Court. Pizza is served during each debate, and those students who attend receive participation credit.

The discussion was facilitated by Brandon Martin, the coordinator for Civic Engagement and Student Leadership Programs and moderated by professor of sociology Martha Ecker.

Ecker then explained that union density, which is the percentage of those who belong to labor unions in the U.S. “has decreased dramatically in the last several decades,” and is around 11 percent, while “it was at its highest in the 1960s,” at around 30 percent.

The fundamental question of the case was “whether the decision that allowed public sector unions to collect share dues or agency shop fees, whether that should continue,” Ecker said.

Ecker explained that, although membership dues do not go toward political activities of the union, agency fees do go toward legal advice, hiring a lawyer to represent members and more.

Some students pointed out that, although one’s dues are not directly used to fund political activities, being part of a union that publicly supports a political individual, party or opinion can be seen as that individual’s opinion, as well. However, Ecker pointed out that this only attributes to private sectors, not public, which is what the case is about.

“The rationale for that was, although workers can elect not to join the union, the unions still have to defend those workers at the bargaining table,” Ecker said.

Ecker said that Friedrichs v. California Teachers Association “represented a real threat to the ability of unions to collect agency fees.” Agency fees are a significant part of unions’ budgets.

The case was brought by Rebecca Friedrichs, a California teacher, as well as nine other teachers. The case was funded by a number of other organizations, including the Center for Individual Rights and the Christian Educator’s Association.

The initial question was whether or not collective bargaining was a political activity on behalf of the members, which has always been a contentious issue for public sector unions, according to Ecker. For the longest time unions were not allowed to collective bargain.

Law and society professors Jillian Weiss and Mihaela Serban attended the talk and discussed what legal implications there would be for unions if, in fact, the court decided in favor of the California teachers.

Ecker said, because unions were very scared for the rule to be against them, they tried to get as many full due-paying members as they can.

Looking at the case in relation to Ramapo, one can become a member and pay their membership fees or they can decide not to and only pay the agency shop fees.