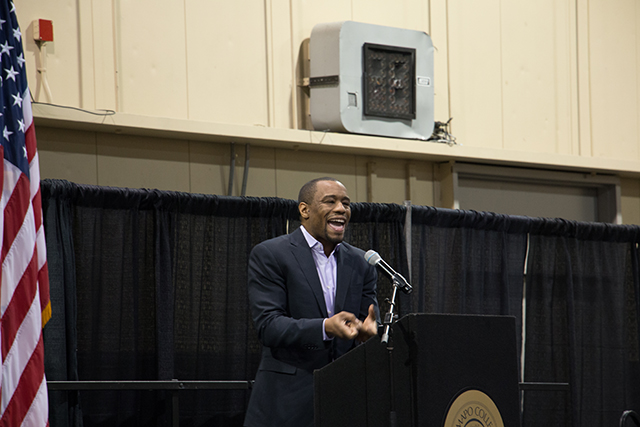 Dr. Marc Lamont Hill, an author, teacher and activist visited Ramapo College on Wednesday to give a lecture, “Building Community in an Hour of Chaos: Progress in the Age of Obama.” Hill’s speech was a mix of humor and hard-hitting truth that urged students and faculty to make a change.

Hill, who visited Ramapo once several years ago, started his address by touching on the concept of Black History Month and its tendency to always only spotlight several well-known figures, like Rosa Parks or Martin Luther King Jr.

“The success of Barack Obama makes people think that we don’t need things like Black History Month and BET,” Hill said. “They think that because we have a black president, the race issues have been resolved.”

Hill moved on to discuss colleges and their role in building diverse communities. The biggest push-back against many issues, including police brutality, has been seen on college campuses.

“Students and college students in particular, have been central in repairing the damage that has been done,” he said.

Hill cited the idea that colleges tend to care about their own interests and not the feelings of their community, stressing that faculty should listen to students, rather than talk down to them. He then had the audience join him in singing the black national anthem, “Lift Every Voice and Sing,” making the point that every voice needs to be heard.

Hill also addressed the need for diversity on college campuses.

“It doesn’t go without saying in this world. It needs to be said repeatedly,” he said.

By diversifying colleges, it is not just the admitted students that benefit.

“Institutions themselves are more dynamic, more interesting, more compelling, more progressive,” Hill said. “We can arrive at new types of conclusions when we have new types of people.”

“When you bring other ethnicities into the school, they don’t just benefit because they get to go to Ramapo; Ramapo benefits because the students that are already here have access to a new range of experiences, a new range of knowledge, a new type of community,” said Hill.

Student Trustee Co-Chair, Josef Weikl, confirmed this idea, saying that his experiences as a resident assistant introduced him to many international students and their cultures.

Hill highlighted the importance of diverse college campuses, stating that if students don’t feel like they belong, they will not stay.

Hill touched on those issues concerning the Supreme Court. Despite the apparent diversity of the justices in race and gender, almost all of them graduated from Harvard or Yale. Hill noted that all of those aspects affect the way someone interprets the law and that the court has little diversity in those areas.

To the students, he emphasized the importance of young people and technology in making change.

“Every movement, every struggle has been led by young people,” he said, noting how young many civil rights leaders were. He also went on to call Twitter “guerilla warfare” against biased media especially in the case of the Ferguson protests.

“The work that needs to be done on college campuses to diversify will only happen if you all are willing to commit to brave action every single day,” Hill said at the end of his address. “We all have advantages and privileges we must sacrifice in the name of justice.”

His message resonated with many students in the audience.

“A lot of people don’t see what we see,” said senior Raven Jones. “When I’m in class, I’m the only black person in all of my classes. I don’t want to say I’m uncomfortable, but I feel like there should be more than just me.”

“I think the worst thing about the presentation was that I agreed with all of it,” President Peter Mercer joked. “And it wasn’t easy to agree with all of it from where I sit. It was disquieting in some respects. It’s challenging but his is a hopeful message.”