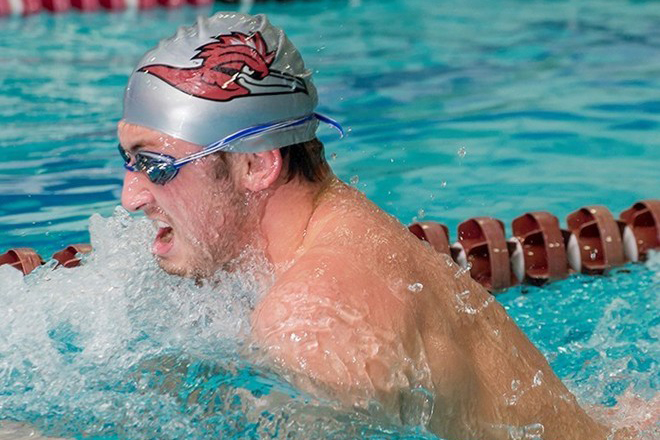 The men’s and women’s swim teams both competed in the MET Championships over the week, and, despite finishing in eighth and seventh place respectively, members of both squads set new school records.

Three records were broken on the men’s squad while they tallied a total of 441 points in the meet.

Freshman Jesse Smith swam the 400-yard instant medley, or IM, in 4:12.89, good for an eighth place finish as well as shattering the old record of 4:17.64 set by Andrew English and current head coach Gary Orr.

Smith also broke the school record for the 200-yard butterfly, touching the wall in 1:56.63.

Junior Evan Graziano was the other male Roadrunner to break a Ramapo record, finishing in 13th place overall in the 100-yard butterfly at 50.97.

No record was broken in the 400-yard medley relay, but the team of sophomore Jose Alferez, Carillo, senior Peter Kellner and Graziano finished the race at 1:27.81, good for sixth place overall.

The other records broken were thanks to the lady Roadrunners, two of them by junior Brenda Arthur, as they tallied 557.50 points, the second-most in program history.

Senior Danielle Bach broke the 100-yard backstroke record with a 59.79 in prelims; she finished in seventh place in the finals at 1:00.88.

Orr said he was happy with some of the results but wanted others to swim better.

“I would say some swimmers performed exceptionally, while others did not,” said Orr. “Much has to do with keeping that tough mental approach.”

Orr said the swimmers have a lot to control heading into the offseason and beyond.

“Continued hard work with mental toughness and consistency is what is needed,” said Orr.