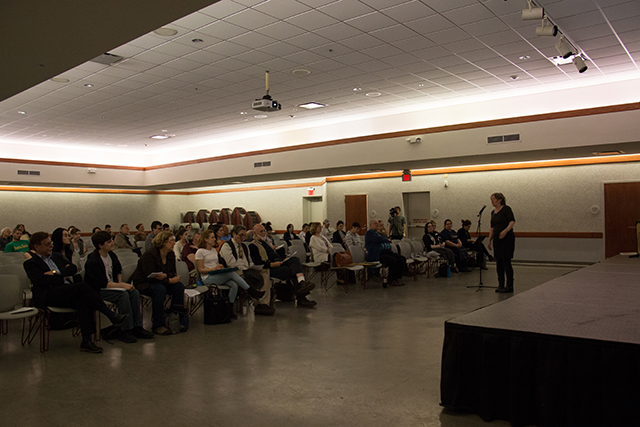 On Wednesday night in Friend’s Hall, Professor Michael Edelstein hosted a presentation on the late Murray Bookchin, who taught at Ramapo College during the early seventies. Social ecology and Bookchin’s own theory, libertarian municipalism, were the main topics of the discussion, as well as how and where these ideas can be applied to the modern world.

The keynote speaker was Janet Biehl, author of “Ecology or Catastrophe: The Life of Murray Bookchin,” a biography of the acclaimed thinker; she also gave a brief history of his upbringing in Brooklyn and his experiences that led him to the theories he devised later in life.

Biehl began the presentation with a background on Bookchin, who was the child of Russian-Jewish immigrants born in the 1920s. His life was influenced by the face to face interactions he had within his community every day. These would inspire his later theories revolving around face to face democracy and politics predicated on the community. These interactions, and in particular the interactions with his social-anarchist grandmother, would prove to be paramount in his mentoring and influential in shaping the thinker he would become.

His ideas, while uniquely American but anti-capitalist, were steeped in Marxist ideology during his formative years, but morphed into a socially driven ideology, after realizing the utopia inherent to Marxist belief was unattainable. His new set of beliefs eventually led to his theory of social ecology, which readily addresses economic, political, environmental and social elements as a way to create a more sustainable and prosperous society. His theory was based on the idea of “political decentralization,” wherein citizens “need to take charge of their own lives” and become active proponents of local governments, Beihl explained. According to Beihl, the urban centers that have become the epicenter for all economic and environmental turmoil have taken their toll on the current social paradigm.

Where sustainability and ecologically viable solutions have been abandoned, but needed the most, are in massive cities, where nearly every citizen must rely on the state for their survival. The agricultural industry and energy industry in particular benefit from an uninformed and disinterested populace that must have an inherent need for the services they provide.

Biehl’s presentation, as well as the personal thoughts added by colleagues and Bookchin’s former students, was especially pertinent during today’s political races and the constant campaign and marketing for US president. Bookchin’s idea of libertarian municipalism revolved around three generally perceived as progressive views that have yet to take hold in any major capacity: face to face democracy, a practice first devised in ancient Greece, gender equality, a disturbingly underrepresented problem in today’s world and social ecology, which presents politics as a result of the careful integration of social, economic and environmental factors. Often times, politics diverges from these values and seeks for allegiance to a party, not allegiance to its citizens. Bookchin’s path to social ecology was based on a simple premise, one that many people deem as ubiquitous: basic human freedom, a right that most people live without and that Bookchin saw absent in America throughout the course of his life.