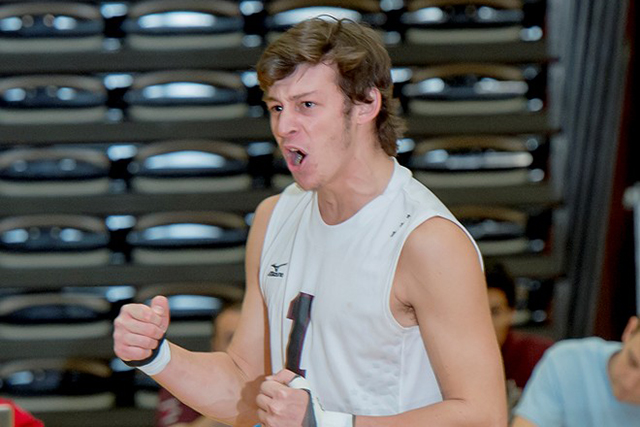 The men’s volleyball team was looking to continue their two-game winning streak Wednesday night at the Bradley Center when they faced No. 4 Stevens Institute of Technology.

The Roadrunners fell short to the Ducks in straight sets (25-20, 25-20, 25-14). However, it was no easy win for the Ducks – the Roadrunners made sure their opponents worked for each point they scored against the tough Ramapo defense.

Prior to the game, freshmen outside hitter Jordan Elam said, “we have to be hungry on defense, play clean then let the individual talents shine.”

The Ducks bench ran long as they were 20 active players deep, which was a good advantage against Ramapo. The Roadrunners currently have nine players in total, so keeping fresh legs on the floor is a tough challenge for head coach Kevin Rodgers.

Despite losing in straight sets, the Roadrunners gave the Ducks a run for their money, but it was the mental mistakes and fatigue that played a role against the team. Ramapo men’s volleyball has shown they can compete with any team, but being a young team, they may tend to make mistakes on the court.

They have played against numerous nationally ranked teams – in fact, they took No. 7 Dominican University to five sets; however, they lost the fifth set after losing the first two, then winning the next two.

The Roadrunners tallied 29 kills, 29 digs and two aces, while the Ducks came up with 30 kills, 32 digs and four aces.

Freshman outside hitter/opposite Paul Close had a team high of 12 kills, while junior outside hitter Connor Brandow had the team’s only two aces.

On defense, both Elam and Brandow tied with two blocks each.

Sophomore outside hitter Justin Feigeles struggled against the Ducks, recording just four kills and nine errors, hitting -.250 on the match. It was the first time he hit in the negatives this season.

The Roadrunners are ranked second in the Skyline Conference standings, with an 11-2 conference record. The team feels confident that they can make a run when playoff time comes around.

Elam said he wants to “focus on what I need to do to help my team during playoff times; I want to make sure I can played my best for my teammates.”

There are four games left in the season and three of them are conference play. The Roadrunners will travel to the Bronx to face conference rival New Jersey City University this weekend at 1 p.m.