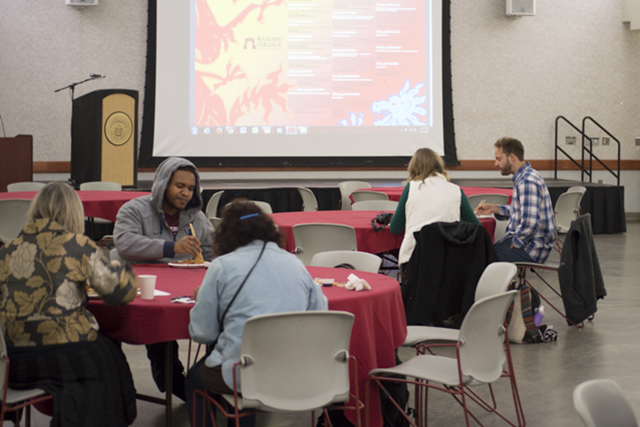 April is Asian and Pacific Islander, also known as AAPI, Heritage Month at Ramapo College. The Equity and Diversity Programs kicked off the month with a luncheon and banquet Monday afternoon in Friends Hall.

The event included an opening proclamation from President Peter Mercer, cultural foods and a Ramapo alumna as guest speaker.

“During Asian and Pacific Islander Heritage Month we honor the perseverance of those who courageously reach for their hopes and dreams in a new land and we celebrate the important impact that the AAPI community has made on our nation’s progress,” said Tamika Quick, the assistant director for Equity and Diversity Programs.

President Mercer then made his opening proclamation.

“We at Ramapo College want to emphasize the community, diversity and the amazing differences that make each group unique. Under the umbrella term of Asian, each group brings their own traditions and beliefs to the world,” said Mercer. “We invite all members of the College to proudly join in the celebration of Asian and Pacific Islanders and people of Asian and Pacific Islander descent, culture, heritage and accomplishments.”

The guest speaker at the event was Ramapo alumna and former president of the United Asian Association, also known as UAA, Janet Namkung. Namkung’s speech focused mainly on the AAPI community in relation to civic duty and representation during elections.

“We are perpetually viewed as foreigners and a community that doesn’t belong. But why is that? There are the usual answers: the lack of knowledge, lack of exposure and ignorance, but all of this points back to the fact that the AAPI community has the lowest percentage of folks who turn out to vote each year,” said Namkung.

While the AAPI community as a whole has low voter turnout and registration rates, young adults in particular are often absent from the political race.

“Specifically for the AAPI youth, ages 18-29 have the lowest registration rate out of all groups in 2012 and consistently have the lowest voter turnout during elections,” said Namkung. “We need to improve these numbers as 26.7 percent of the AAPI community’s citizen voting population is between 18 and 30, with over 2.8 million AAPIs between that age.”

Namkung also reflected on her parents’ struggles as Korean immigrants in America.

“They were positive contributors to this country, but their accent and broken English was enough to be considered less than. Representation was not a right that was allowed to them,” she said. “At a young age I learned the importance of my voice and the power of my civic participation.”

She even took it upon herself to make sure her parents voted.

“Although they didn’t know how to use the machines, I went into the booths with them and voted for them. It is an actual right to have assistance in the voting booths, according to Section 208 of the Voters' Rights Act,” said Namkung.

Namkung urged all student activists to “stay angry” when it comes to social justice and equality.

“There’s ways to stay angry, but make it uplifting and be able to do so much in the community. You might not see the results and the outcomes right away, but it’s always about the bigger picture and I think that’s what keeps me alive and woke and just gets me to keep doing this,” she said.

“The importance of Ramapo celebrating this month is to validate and recognize the Asian community,” Cody Lucinario, a junior and public relations officer for UAA, said.

The theme for the rest of AAPI month is “Bonds Forged Through Differences” and students can expect a variety of events from workshops, game nights, cultural plays, movie screenings and educational events.