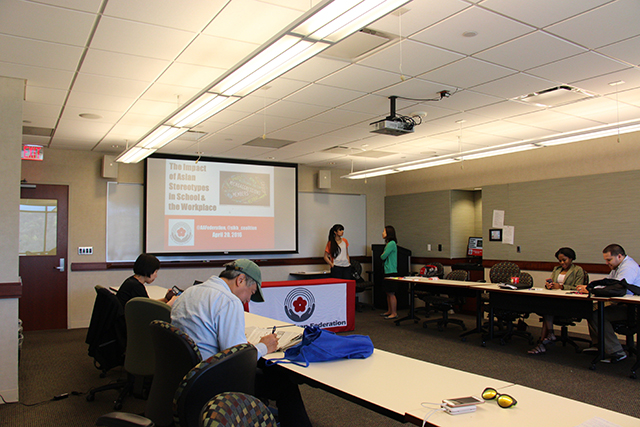 On Wednesday, the Asian American Federation was invited to discuss common Asian stereotypes such as the “perpetual foreigner” and the “model minority.” The discussion focused on what role those stereotypes had in the rise of bullying of Asian-American youth and micro-aggressions against Asian-Americans in schools and the workplace.

Joo Han, the program and communications director of the Asian American Federation, and Hajot Kaur as well as the community development manager at the Sikh Coalition, co-presented the event.

The Asian American Federation provides different social services including education, healthcare, advocacy and affordable housing to the Asian-American population. The Sikh Coalition is a nonprofit organization that fights for civil rights of all groups. Its services include legal advocacy, community development and education.

After briefly introducing the federation and coalition and what work is done within, the two presenters opened up the discussion to share personal reflections about why attendees identify as an Asian or how the attendees view Asian people.

Students, professors and presenters shared their experiences either as an Asian person, or as a friend or acquaintance of an Asian person. Some Asian attendees shared that they consider themselves to be Asians just because of geographic locations.

Other Asian attendees stated that they consider themselves to be Asians because the U.S. census categorizes them as so. Professor Maggie Lien-Fang Ho specifically stated that she does not call herself Asian and does not see why “Asians” should be classified as one group when each country is so distinct.

Some Asian students shared their experiences as a perpetual foreigner both in the U.S. and their “original” country – how people from the U.S. and the other country both do not consider them to be “one of them.”

Following the discussion, Han spoke of common Asian stereotypes, including the model minority myth – which was created by a white man – the perpetual foreigner, the nerd, the poor communicator and the submissive, quiet one.

The model minority myth is about how Asians are supposedly “all over-achieving super nerds,” who are all “successful.” The myth was used to undermine the needs of the Asian-American community, as well as to negatively compare them to other communities of color.

Common misconceptions that all Asians are good at math and science were also discussed. Han shared how she was always assumed to be the math teacher or tutor at her old teaching job.

The wrongful expectation that Asians are to be submissive and quiet was also discussed. Professor Maggie Lien-Fang Ho shared her experience during which she was always considered to be trustworthy and capable, but was never considered that way during promotion season, because of the stereotype that she probably would not speak up even if she were wrong.

Overall, the discussion did cover a vast variety of exposed and underlying problems, and conflicts that Asian-Americans face in the United States today.