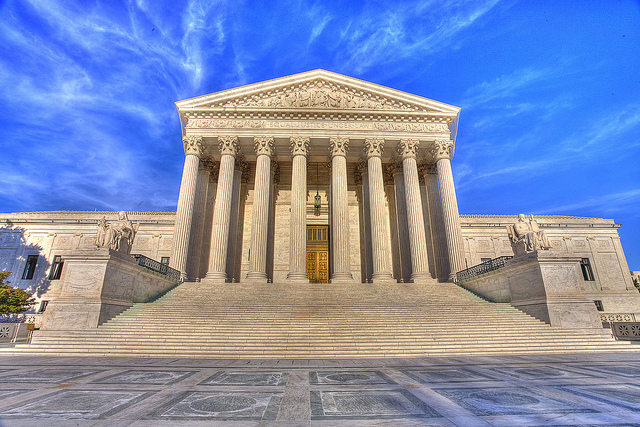 For their second discussion of the year, the SCOTUS series focused on Utah v. Streiff, a recent case involving search and seizure and fourth amendment rights.

Michael DeMarco, deputy first assistant prosecutor in Passaic county and professor of criminal law at Ramapo, led the discussion by sharing his knowledge and experience.

“The decision that we’re going to review today, Utah v. Streiff, is one that I really thought was primed to be a 4-4 tie,” Demarco said. “But it wasn’t. There was a majority here and it was a pretty unusual move for Justice Breyer. I think he was really the lynchpin here for the majority.”

In Utah v. Streiff, an officer spent a short time observing a possible drug house based on an anonymous tip and decided to stop a man exiting the house and question him. This man was Edward Streiff. After running his ID, the officer discovered that there was a warrant out for Streiff’s arrest and then searched him, finding crystal meth.

“In Streiff, if you recall the facts of the case itself, it was an anonymous tip that came into the Salt Lake City police department that said that narcotics were being dealt from a location, from a residence.”

Demarco went on to explain that anonymous tips typically come from rival drug dealers and are usually held at a lower value than tips from confidential informants and concerned citizens.

Initially, Streiff had conditionally pled guilty. If the evidence found on him was later found to be unlawful, he stated that he would take his plea back.

When the case got to the Utah Supreme Court, it ruled in favor of Streiff, saying that the search was improper as the officer did not have probable cause to search Streiff after he left the house. However, on June 20 the decision of the U.S. Supreme Court was ultimately to rule in favor of the police officer.

According to Demarco, this had a lot to do with the gray terms in the Constitution.

“That magical word ‘unreasonable’ has meant so many different things based upon either what the current law enforcement is doing or what past practices may have been,” said Demarco, adding that each Justice is free to interpret that word as something different. “Writing that into the fourth amendment really allows for this type of back and forth when it comes to police practices and whether or not what the police were doing violates the terms of the fourth amendment.”

Cases like this one in the past, specifically Brown v. Illinois in 1975, have led to the creation of the Attenuation Doctrine.

The Attenuation Doctrine outlines three factors that allow evidence to still be admissible even if it was discovered illegally, as it was in the case of Utah v. Streiff. First, the court looks at how closely the unconstitutional stop and the discovery of evidence occurred.

“If there is a quick time between the unconstitutional act and the discovery, that is going to satisfy this first proximate factor,” said Demarco.

The other two conditions are the presence of intervening circumstances and most importantly, an evaluation of the flagrancy of the official misconduct. The last factor is most important for many reasons. To explain this, Demarco posed a hypothetical.

“If it was rather just an officer approaching Mr. Streiff on the street who was African American…that would in essence be something that is so flagrant, so akin to racial profiling that the court would say even though you may satisfy the first and second, this third problem is so blatant that this search now has to become improper.”

Justice Sotomayor’s dissent on the case echoed this.

“By legitimizing the conduct that produces this double consciousness, this case tells everyone, white and black, guilty and innocent, that an officer can verify your legal status at any time. It says that your body is subject to invasion while courts excuse the violation of your rights,” she wrote.

The idea of how race plays into the flagrancy of actions also brought an issue in the presidential election into the discussion.

“What the justice doesn’t mention and what a lot of people have difficulty dealing with in society is that balance between people’s right against unlawful searches and seizures and people’s right to live in a crime free area,” he said, pointing out that many innocent families fall victim to shootings in Patterson.

However, a new era of searches is coming as technology is continuing to advance. Many officers now have multiple scanners in their cars that run the license plate of every car they pass, immediately alerting them to any warrants or alerts concerning that car. There is no way to tell how the Attenuation Doctrine will adapt to the era of technology.

“How law enforcement will use this decision moving forward is obviously yet to be seen,” Demarco concluded, “but it is clearly a victory for law enforcement.”