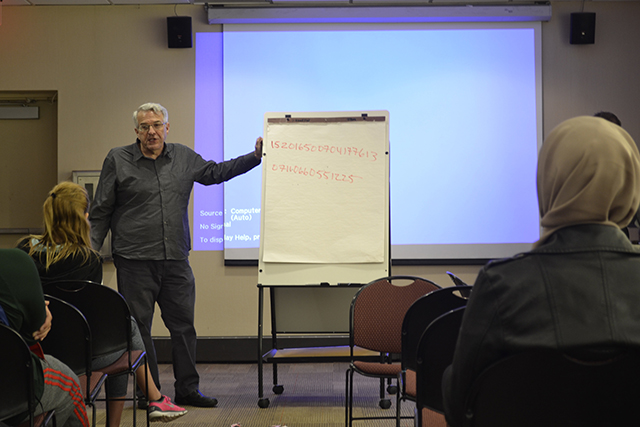 On Monday, Dr. Rob Gilbert came to speak to students about school and motivation as a part of Disability Awareness Month at Ramapo.

Gilbert is a professor of sports psychology at Montclair State University who has done many studies on motivation and teamwork. He and John Delate, another professor from Montclair, helped Ramapo students find new strategies to be energized in class, memorize difficult sequences and avoid distractions.

“Our goal is to do things today that will literally change your life,” Gilbert said. “College is easy, you make it difficult.”

He explained that the same concept applies to paying attention in class.

“Act as if you’re totally into it,” he said, adding that it almost always creates an actual interest in the class.

“Who really wants this $10?” he asked as he waved the money in the air.

Students in the audience raised their hands, but were reluctant to stand and take the money from him. However, he gave the money away to the student who finally got up and came forward.

Gilbert had another trick up his sleeve, too. He pulled a deck of cards out and ripped them in half, telling the audience that if a man in his sixties could find a way to rip a deck of cards that they too could do things they never thought they could.

“We all have the ability, all we’re lacking is the strategy,” he said.

Gilbert went on to prove to the audience that all it takes is the right strategies to do what seems almost impossible. After writing a 32-digit number down, he taught the audience how to remember every number in under a minute by creating a story around it.

“We remember stories,” he said. “It's not about memories, it’s about imaginations and if you can make anything vivid enough.”

Delate added that distractions are another major thing that keep students from reaching their fullest potential. He named cell phones, videos, music, friends and snacking as the top five distractions.

Delate urged students to try to work up to the work methods of classical musicians, which is 90 minutes of distraction free work with a 20-minute break.

“In that 90 minutes, they get more done than most people do in a day,” Delate said.

Students and staff alike walked away from the experience inspired to do better.

“I’m a really big fan of Dr. Rob Gilbert,” said Ramona Kopacz from the Office of Specialized Services. “He runs the success hotline number that my husband and I call every morning at 5:30 as a part of our daily routine.”