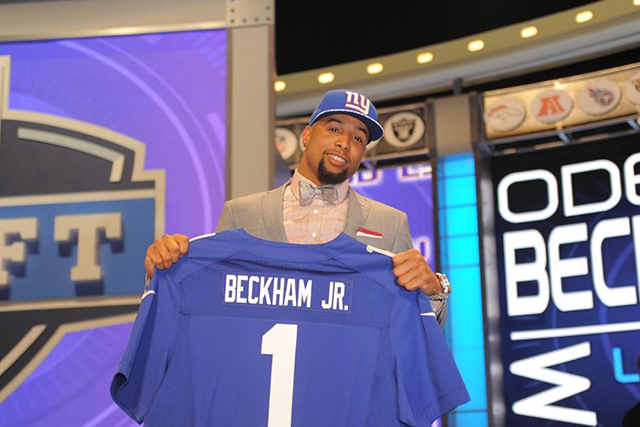 Odell Beckham Jr.’s name speaks louder than any other New York Giant currently, and that includes two-time Super Bowl MVP Eli Manning. His electrifying touchdowns, his endzone celebrations and his frosted tips have elevated his persona to a major level of Big Apple stardom. His passion and antics have caused him to have his supporters and haters, but not many can say he isn’t a talented player with a will to win.

At the end of the 2015 season, Beckham had the record for most receiving yards through a player’s first two seasons with 2,744 yards, while missing five games (four due to injury, one because of a suspension). What many remember from last season was his scuffle with Panthers cornerback Josh Norman in Week 15 where Beckham drew three personal fouls in one game. This led to his one-game suspension and a bad reputation from the rest of the NFL.

Fast forward to Week 3 of the 2016 season in a home game against the Washington Redskins, and Beckham appeared to get out of control again, but this time it was on the sideline. Early in the fourth quarter, Manning threw a crucial interception in the endzone while targeting tight end Will Tye. On the previous play, Beckham caught a bad pass, stiff-armed rival Norman and cut back for a 24-yard gain. While the Giants headed to the sideline after the interception, an angered Beckham violently threw his helmet at a practice kicking net which swung back and hit him in the head. He also seemed physically upset –  yelling and crying in between possessions. The Giants ultimately lost the game, but Beckham had a great stat line that featured seven receptions for 121 yards.

The next week, the Giants took part in an ugly loss against the Minnesota Vikings on Monday Night Football. Beckham only notched three catches for 23 yards and received an unsportsmanlike conduct penalty after yelling at an official. It was a rough week for Beckham, but his attitude took a complete 180-degree turn and it was obvious to see in a Sunday night game against the Packers. He registered five receptions for 56 yards and a great tip-toe touchdown grab. After the score, Beckham ran to the kicking net he once betrayed and hugged it as a joke. In that moment, it seemed that Beckham was learning to laugh at himself and turn his embarrassing moments into humorous celebrations. His brilliance continued to show in his next game against the Baltimore Ravens.

The Giants offense had hit a wall the past two games against Minnesota and Green Bay, but after battling a hip pointer in the first half, Beckham scored a 75-yard touchdown late in the third quarter to put the Giants up 17-13. After the touchdown, he proceeded to act as an Olympic long-jumper and then laid down underneath yet another kicking net. Late in the fourth quarter, the Giants fell again, losing 23-20. But again, Beckham saved the day. On 4th and 1, Beckham caught a ball over the middle and outraced everyone to the endzone for a 66-yard game-winning touchdown. After the touchdown, Beckham took a visit to the beloved kicking net and pretended to propose to it.

Many fans are outraged by his antics, claiming he is all about himself instead of the team, but he is the reason why the Giants’ season was saved Sunday.