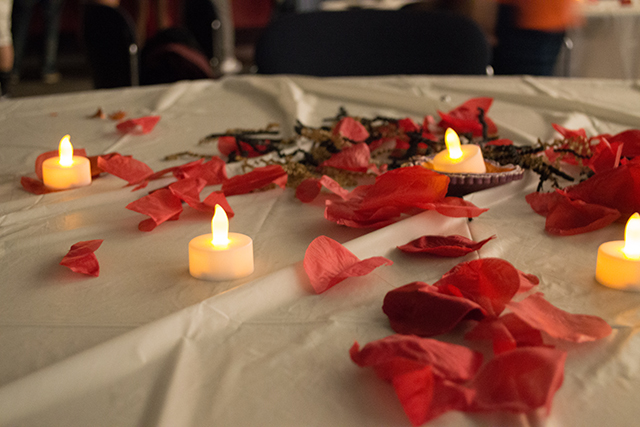 More than 100 students filled the Trustees Pavilion on Monday night for several hours of fun, food and culture as they celebrated the Hindu holiday of Diwali. The event, hosted by South Asians of Ramapo organization, was meant to teach attendees about the special Festival of Lights.

Pritha Aggarwal, a junior and president of South Asians of Ramapo, explained the holiday.

“Diwali for me is the Festival of Lights, and you celebrate by doing prayers at home normally, along with lighting lots of candles all night long,” Aggarwal said. “And it basically represents one of our gods coming back from exile, so it’s a welcoming back. It’s also considered Indian New Year.”

She went on to explain that Diwali is now celebrated with secular festivities, like eating special occasion foods, henna tattooing and playing Indian board games. These activities were featured at the Ramapo celebration.

Vice president of the club and junior Devashri Parikh said, “We wanted to bring Diwali to Ramapo to expose and introduce students to our culture. We noticed that there were a lot of South Asians here, and felt that this event would be very welcoming to them.”

But the event was visited by many more people than the club expected, of all different cultures.

“The turnout was really good – 165 people came, the biggest number we’ve ever had,” Parikh said. “We met a lot of people and people we didn’t even know were South Asian, so we want to begin building a community.”

The room’s built-in lighting was dimmed and the space was lit up with electronic tea lights instead. Indian pop music blared in the background as students talked, laughed, ate and appeared to have a great time. Sophomore Jaise Vincent said it was his first time celebrating Diwali.

“The extent of my knowledge about Indian culture is when my family goes out for Indian food,” Vincent said. “But this event was really fun, and the food was amazing. I will definitely come again next year.”

The event was also a fond reminder of home for some attendees, including freshman Anishke Dissanayake, who is an international student from Sri Lanka. Dissanayake said, “Diwali is a Hindu religious festival, mainly celebrated in India, but I have never been to India and I’m not Hindu. But it is still celebrated in Sri Lanka, because it is typically celebrated the same within different countries.”

“Although the food wasn’t special occasion food, it was still very good. It was more everyday food that all people can enjoy,” Dissanayake said, before jokingly adding, “It wasn’t spicy enough for Indian food, but as a person who doesn’t like spicy food, I liked it.”

The Diwali event certainly sparked many students’ interests. Many seemed to leave the event with smiling faces, full stomachs and a newly kindled sense of global knowledge.