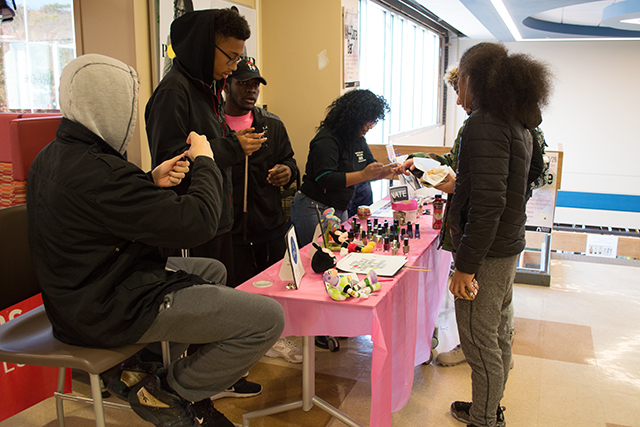 Banding together in solidarity with other male organizations on campus, the Health and Awareness Team sponsored the Polished Man project at Ramapo College to raise awareness about widespread violence against children.

“The meaning of the campaign is to stand against violence and let children know that there is somebody out there for them,” said Amauris M. Peralta Muños, member of Lambda Sigma Upsilon Latino Fraternity, Inc. “If any of our incoming freshmen or students have been abused as kids, we want them to feel open and know that there are people here who will support them no matter what. We will not judge them for their pasts.”

The Polished Man project is a movement organized by YGAP, a non-profit organization envisioning a world without poverty. When CEO Elliot Costello heard Thea’s story, a young girl in Cambodia who was both physically and sexually assaulted by an orphanage director. When Costello and Thea met, they bonded immediately, and before he left, she painted his nails with blue polish. Now, he still paints his nail in remembrance of her.

One in 26 children are victims of violence in Australia, equivalent to one child in every school classroom. More than 150 million girls and 73 million boys around the world are victims of sexual violence.

These types of disheartening and disturbing statistics prompted Costello to create the Polished Man project, a fundraising campaign that asks men to join the movement by painting one fingernail to represent the one in five children that are affected by physical or sexual violence before the age of 18.

Audrea Leiva, senior peer educator of the Health Awareness Team, discovered the Polished Man movement through a television commercial that showed men painting one nail as a symbol of putting a nail in the coffin of violence against children.

“I’m a person who is very sensitive to children. These college students are eventually going to become parents and have kids,” said Leiva. "This is the reason why I definitely wanted to do it on campus, especially for men with the idea of masculinity and being superior. That’s what happens with violence against children. They feel superior enough to do these things as a father role or as a person on top of the children.”

With 90 percent of all sexual violence perpetrated by men, according to statistics from the official site for the Polished Man project, the campaign does not intend to blame the male population, but rather to encourage them to start the conversation about the issue.

“I feel like men are afraid. Let’s just say putting nail polish on one finger, some men will back and be like, ‘Oh, that’s gay or whatever. I’m not doing that to myself,’” said Niocelys Guzman, junior. “But I think this is very empowering because it’s showing that they are not afraid to step out there and say, ‘I support this and I’m doing this for a certain cause.’”

The music booming through the speakers may have attracted the attention of some participants but others had a personal connection to the issue that pushed them to donate money and paint one nail.

“I was around six and my little neighbor – his dad would hit him really hard,” said Kevin Ruano, junior. “I feel like it’s something that shouldn’t be going on anymore. We should definitely spread awareness about it.”

While men were willing to participate in the project, others were a bit wary about wearing the nail polish after leaving the table.

“As men come, they are like, ‘Do I have to paint my nail?’ It’s funny because they will support it here, but the idea is to carry it on,” said Leiva. “They don’t want to carry it on, asking if they can remove the nail polish. The point is that if people ask you, you can spread the awareness that way.”

Funds raised at the event will be sent to YGAP, which distributes it across a number of different trauma recovery and prevention programs to help children who have been victims of violence or are at risk for being one.