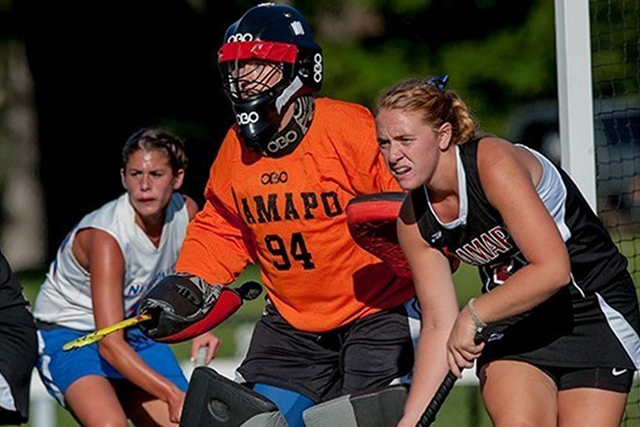 The Ramapo College women’s field hockey team fell in a shootout to the Manhattanville Valiants on Tuesday by a score 4-3 in overtime.

With the loss, the Roadrunners fell to a 2-11 overall record on the season while the Valiants improved their record to 11-5 overall.

Manhattanville started the game off strong with Bregje Smits putting the Valiants on the board early. It was Smits’ 15th goal of the season. The goal was assisted by Melissa Stys.

About six minutes later, Lisa Maxwell gave the Valiants a 2-0 lead with a goal unassisted.

Amanda Cirocco found the back of the net with a goal of her own with just under seven minutes left in the half to make it a 3-0 game. Her goal was assisted by Maxwell.

Both teams took four shots in the first half, but the Roadrunners could not cash in.

However, Ramapo had eight corners in the game at that point compared to the Valiants’ two corners. In the second half, the tides turned for the Roadrunners.

Despite being down 3-0, Ramapo came storming back. Nicole Healy started the comeback in the 55th minute by scoring a goal after Ramapo was given a penalty stroke.

Soon after that, the Roadrunners began to pick up momentum. Gianna Mouskourie darted a pass to Stephanie Gallo who scored a clutch goal. This came in the 65th minute leaving Ramapo down 3-2.

To complete the comeback, Mouskourie knocked in the game-tying goal in the 67th minute to make the score 3-3. Healy came up with the assist on the critical play to send the game to overtime.

Ramapo’s second half success was also aided to the fact that they had three times as many shots as Manhattanville did.

After the intense scoring, both defenses rose to the occasion in the extra period of play. In two separate 15-minute periods, the Roadrunners and the Valiants could not score. Because of these circumstances, the game was to be decided by a shoot out.

After penalty strokes were scored by Stys and Robin Boot from the Manhattanville side, and Healy and Ronni Wellema from the Ramapo side, Cirocco scored the game-winning penalty stroke.

The Roadrunners will play the final game of the 2016 season when they take on No. 13 Montclair State University on Saturday at 1 p.m. It will also be the team’s Senior Day.