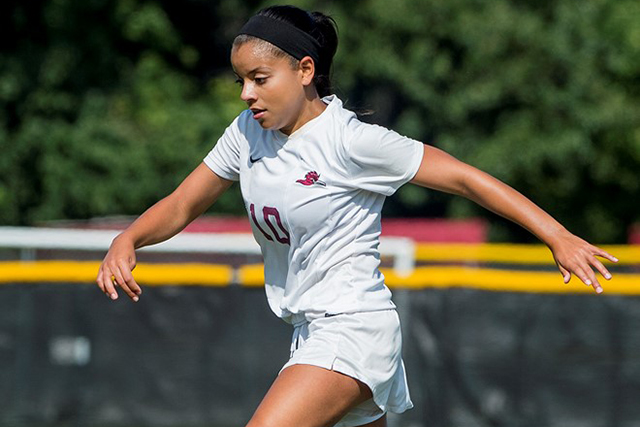 The Roadrunners looked to send their seniors out on a high note when they faced off against No. 10 Rowan in their final home game of the season on Senior Day. Seniors Lauren Laskowski, Danielle Bach, Kelsey Sutherland and Bryce Knoblock were honored before the game; however, the Roadrunners went on to lose by a score of 4-1.

Knoblock said that there were no expectations, and that the team was focused on playing their game.

“We didn’t really have any expectations; we were just trying to play our game because we knew we had a shot because last year, they were ranked really high too, but we didn’t do that bad against them,” said Knoblock.

The Roadrunners held the Profs offense in check until the waning minutes of the first half when rookie forward Tori Miller scored her first goal of the season in the 43rd minute of the game with an assist by third-year forward Lauren Coletti. Then in the 53rd minute of the game, senior forward Maxine New slipped a shot into the net for her seventh goal of the season with an assist from third-year forward Melissa Kelly. In the 57th minute, Kelly scored unassisted to put the Profs up 3-0.

The Roadrunners got some hope when third-year forward Nani Vizcaino scored her first goal of the season on a penalty kick in the 76th minute of the game to cut the deficit to 3-1.

Sutherland felt that when Vizcaino scored on a penalty kick, there was still plenty of time to go in the game.

“There was still time in the game; there were 76 minutes, so there was time left, but we put our heads down because they scored right after that,” said Sutherland.

However, the Profs would put the game away from there as they would tally two more goals on the day. In the 77th minute of the game, third-year forward Shannon Reardigan scored her ninth goal of the season, and second-year forward Cathryn McCarry provided the feed.

New would tally her second goal of the game and her 11th of the season unassisted with 11:20 left to play.

Senior goalkeeper Danielle Bach made three saves on the afternoon in over 24 minutes while rookie goalkeeper Elizabeth Harvell tallied five saves in a little more than 65 minutes of playing time.

The Profs created more scoring since they held a 25-9 advantage in total shots and a 14-7 advantage in shots on goal. Of the Roadrunners’ nine total shots, seven of them were on goal.

The Roadrunners ended the season yesterday with a loss to Kean by a score of 2-0. They finished the season with a 3-11-1 overall record and 2-7 in the NJAC.