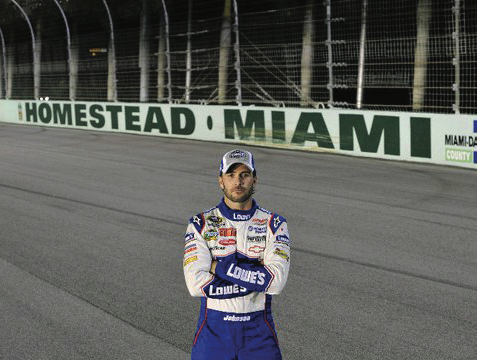 The NASCAR Sprint Cup Series and NASCAR Camping World Truck Series visited Martinsville Speedway this weekend, and the on-track action did not disappoint, as Jimmie Johnson took the checkered flag.

On Saturday, Cup Series regular Chase Elliott led the field to the green flag but lost the lead to Cole Custer early in the Truck Series’ Texas Roadhouse 200.

Ultimately, series veteran Johnny Sauter prevailed over Elliott in the 200-lap showdown to secure his place as the first of four drivers to be locked into championship contention in the Camping World Truck Series’ finale at Homestead-Miami Speedway in Florida on Nov. 18.

The truck race served as a thrilling prelude to Sunday afternoon’s Goody’s Fast Relief 500, the first of three races in the NASCAR Chase for the Sprint Cup’s “Round of 8,” in which the eight drivers not yet eliminated in the Chase must compete to secure a berth in the “Championship 4” during the final race of the season at Homestead-Miami Speedway on Nov. 20.

Martin Truex Jr. and Joey Logano led the field to the start as Richard Petty, NASCAR’s all-time most winning driver, waved the green flag to begin the 500-lap odyssey.

However, Truex and the rest of the field would return to pit road shortly afterwards, with a caution brought out by David Ragan in his No. 23 Toyota.

As Truex battled Matt Kenseth for short-track supremacy, Jeff Gordon quietly made his way through the field. Gordon, substituting for Dale Earnhardt Jr. in the No. 88 Chevrolet, had moved to the fifth position by the race’s halfway point.

A.J. Allmendinger led the race when NASCAR threw the caution, but quickly lost the top spot to Jamie McMurray and then to Denny Hamlin, who has become a force to be reckoned with at Martinsville.

As the race neared its conclusion, Johnson made a furious charge to assume command of the Goody’s 500, and never looked back.

With the chance to win a record-tying seventh championship on the line, Johnson built a commanding lead over the rest of the field, securing his 79th career victory and his ninth at Martinsville Speedway.

Gordon finished sixth in what will likely be his final career start in the NASCAR Sprint Cup Series.

With an automatic transfer to the final round of the Chase for the Championship in Homestead, Johnson has a chance to join Richard Petty and Dale Earnhardt Sr. in what is perhaps NASCAR’s most exclusive fraternity, as a seven-time champion of the NASCAR Sprint Cup Series.