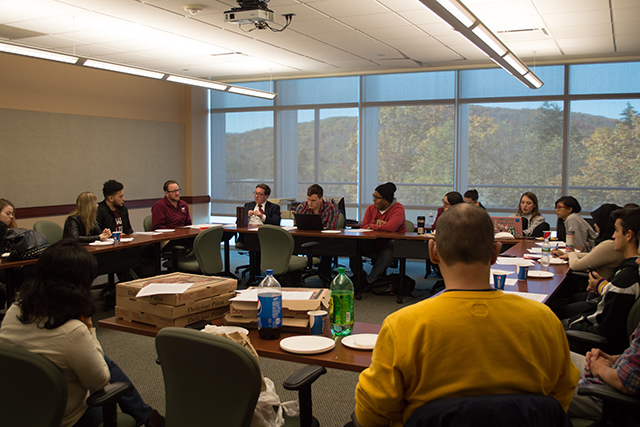 Immigration, one of the hottest issues of the election season, was the topic of the most recent SCOTUS discussion at Ramapo College.

Ben Levy, director of international education, and Martin Kafafian, attorney and adjunct professor of law, both moderated the event initiating the discussion by reviewing the state of immigration in the United States.

There are 11 million undocumented people in the United States and while these people can be subject to potential deportation proceedings, Kafafian emphasized how unrealistic this would be for the government to process.

The conversation quickly shifted to the roles the different branches of government have when it comes to addressing the large population of undocumented immigrants, which was contested in the U.S. v. Texas case presented to the Supreme Court.

“What this case is really about is a conflict or tension between those two roles of government,” said Kafafian.

President Barack Obama announced his plans for the Deferred Action for Parents of America, or DAPA, program in November 2014 as part of his immigration reform policy. This program would grant those who are parents of citizens born in the United States before 2010 a three-year work permit and deportation exemption.

Texas, with the support of 25 other states, challenged Obama’s immigration reform policies by suing the government. There were only eight judges to deliberate over the issue since Justice Antonin Scalia passed away before the case was brought in front of the Supreme Court. Because Texas had won previously in the appellate court, it was decided that the decision would be upheld, meaning that Obama’s DAPA program was revoked.

Shifting the subject to the push factors that spur migration, Levy briefly described what the process looks like for entering the United States legally. With an overwhelming number of requirements and paperwork to be filled out, Levy explained that the three main ways of coming into the United States include applying through family relations, visa applications or refugee status.

“The system is highly complicated. It can cost a lot of money and it isn’t always easy to access or understand. So potentially, that’s why people try to get here through other means to get themselves on the soil,” said Levy.

Levy also used the discussion as a forum to dispel some common myths about immigrants perpetuated by the media or political pundits. For example, he emphasized that not every immigrant comes to the country without papers. Nearly 45 percent of immigrants living in the country in 2009 entered legally and then let their papers expire.

As cultural assimilation became a subtopic of interest, the attendees debated about whether it is appropriate to include a low-level proficiency language requirement on citizenship tests. Most students said that such a requirement is unrealistic because not everyone can easily process and learn a new language.

“It takes three generations for an immigrant community to be fully linguistically assimilated into a country,” said Levy. “The parents really struggling with it, the kids being sort of bilingual and the grandkids can’t even speak to the grandparents because English is their primary language.”

The multiple facets to the issue of immigration in the United States led to questions about whether the presence of these undocumented people are beneficial or destructive to the American economy.

“It’s a tremendous economic loss for the country,” said Sanghamitra Padhy, professor of law and society. “We are kind of forgetting to think that it’s an economic gain because if we do the math, the mathematics say that deporting people is an economic loss.”