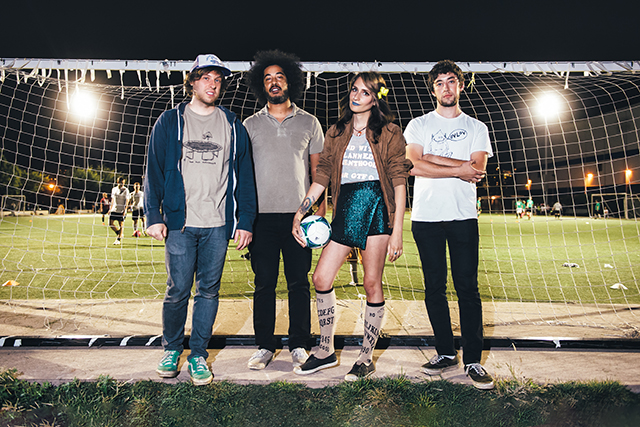 Sadie Dupuis, the chief songwriter and front person of the acclaimed indie rock band Speedy Ortiz, first unveiled her bedroom pop project Sad13 earlier this year, featuring her collaborative song “Basement Queens” with Minneapolis-based MC Lizzo. The song helped to introduce listeners to a new facet of Dupuis’ writing that was similarly off-kilter to her work with Speedy Ortiz, but was reinvented with 8-bit drum machines and scuzzy GarageBand synths that bring a saccharine sweetness to her wonky songwriting. But underneath the playfulness of Sad13’s (pronounced Sad Thirteen) debut album “Slugger” lies a responsibility to make pop music imbued with ideas of affirmative consent, gender politics and safe spaces: notions noticeably missing from Top 40 radio with the success of songs such as Robin Thicke’s “Blurred Lines.” The result is a refreshingly eccentric, offbeat bedroom pop album with Dupuis proving her strengths for songwriting.

Anyone familiar with Dupuis’ work with Speedy Ortiz knows that she has the ability to shred with the best of them. Along with her gnarly guitar, Dupuis is known for the esoteric narratives of her lyrics that she honed while pursuing her master's degree in poetry. On “Slugger,” Dupuis switches the shredding for similarly skewed synths while adapting her lyrical smarts for a pop-driven song structure. A prime example of both these qualities is shown in the album’s lead single “Get a Yes,” an oblique sex-positive anthem about the importance of consent. Both defiant and coy at the same time, Dupuis tantalizes mutual consent between partners, making the concept sexy in its own right: “I say yes to the dress when I put it on / I say yes if I want you to take it off / I say yes for your touch when I need your touch / I say yes if I want to." The quirky, shimmering synths recall the industrial sound of ‘90s alt-pop acts such as Garbage, even evoking a grungy Charli XCX demo.

What truly sets Sad13 apart from other current alternative pop acts is in how she adapts her indie rock style into pop pretense. Don’t be fooled, however: the sugary pop sound is a mere guise for Dupuis’ alt-rock edge. The song “Devil In U” combines life’s general mundanities with her own idiosyncrasies over trudging, grimy synths that embrace Speedy Ortiz’s noisy guitar solos: “I observe the moon / I keep my puppy groomed / And read my books all the way through / ‘Cause that’s what an angel would do / Who’s stuck with the devil in you.”

From start to finish, “Slugger” is a confident, peculiar album that seamlessly combines synthpop music with grungy indie rock. If anything, “Slugger” proves the many ways Dupuis is able to adapt her strengths to a variety of genres. A first listen to the album may throw long-standing Speedy Ortiz fans for a loop, but the appeal of the band, and especially Dupuis, has been their knack for making bizarre melodies sound catchy. Sad13 creates alternative pop music for indie kids and the socially conscious, and Dupuis assuredly knocks it out of the park.