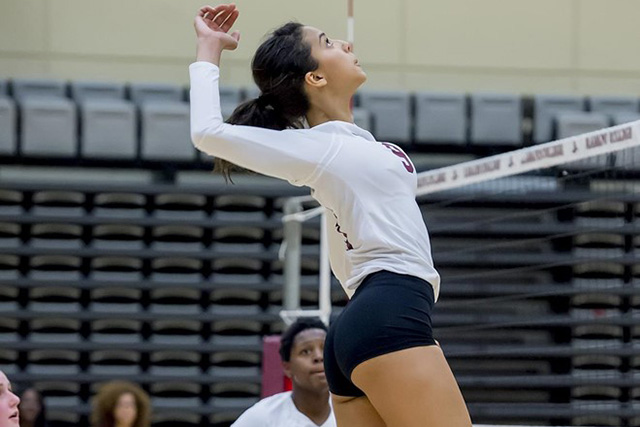 Ramapo’s 12th-year head coach Robert Pichardo said that the Roadrunners fought hard against Eastern University, despite being the underdog.

“It was a lopsided kind of matchup they obviously were the favorite going to the tournament, we were not,” said Pichardo.

“We were able to fight neck and neck with them all throughout,” Pichardo continued. “They’re a tough team, they’ve been there many times before, so they knew how to make a comeback.”

Despite the loss, the Roadrunners put up some impressive statistics. Third year outside hitter Larysa Iwaskiw led the team in kills with 23. Senior outside hitter Rachel Selmore posted a team-high 20 assists, and second year libero/defensive specialist Kristen Behrens recorded nine digs. In addition to leading the team in their respective categories, Iwaskiw recorded an ace, a block and six digs. Selmore posted four digs and a kill and Behrens had one assist.

Senior middle blocker Emily Guzman was one of the other key performers as she led the Roadrunners in blocks with five total, also recording four kills in the same game. Rookie setter Kate Shirkey was second on the team in assists with 10, while fellow rookie Karina Almeda had the second-most digs for the Roadrunners with a total of eight. Almeda also had two assists on her final line for the match.

The Roadrunners finished their season with an overall record of 25-6, which matches overall record from 2010. They went undefeated against NJAC opponents in the regular season for the first time in school history and they received the first at-large bid to the NCAA Tournament ever.

Iwaskiw said that the Roadrunners needed to make plays in this seesaw affair.

“It was definitely important to not let them get on any runs, and I think we did a good job with that,” stated Iwaskiw. “It was just a close game, and I think we made the best that we could have done, so I’m very proud of us.”

Iwaskiw assessed that getting into the NCAA Tournament again will be something that the Roadrunners can work toward for next year.

“The season was amazing. I think no one expected us to get to the NCAA’s. It’s insane, that it’s the first time in school history, so for us to do that is such an accomplishment and it’s only something to build on for next year,” said Iwaskiw.

2016 is the fifth time under Pichardo that the Roadrunners have won 25 or more matches in a season.