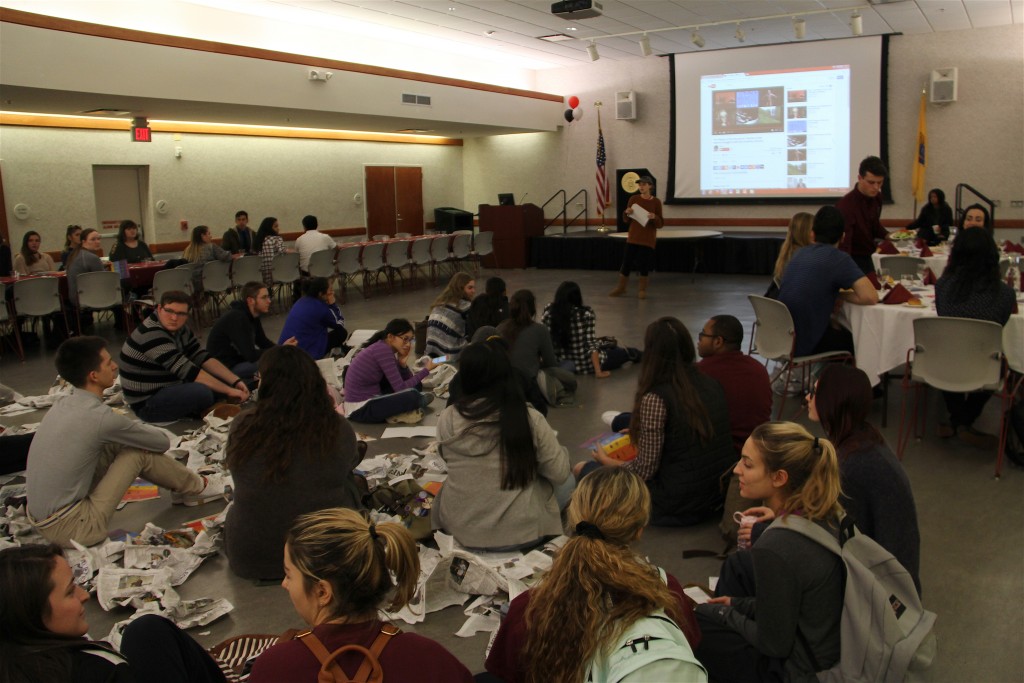 The Civic and Community Engagement Center, also known as CCEC, hosted the fifth annual Oxfam Hunger Banquet on Wednesday night as part of Hunger and Homelessness Awareness Week. Students who came to the event were given a card with their identity and were then divided into upper, middle and lower class.

Oxfam is an international organization that reaches roughly 90 countries to educate and solve the issues of inequality and poverty. According to the Oxfam website, the banquet is a program that the organization has been doing for the past 40 years.

The event started with a video titled, “The Allegory of the Long Spoons,” an animated short that depicts how community and selflessness can end hunger for all.

“A lot of people think that hunger or not having enough food have to do with there not being enough food produced in the world or there’s not enough to go around, but that’s not the case at all,” said Amira Rachouh, senior. “The earth has enough food to fill and feed everybody that’s on this earth. Hunger is about power, it’s about inequality.”

Ramapo’s Oxfam Hunger Banquet placed six people in the upper class standing, 14 in middle class and the overwhelming majority in the lower class. Upper class members sat at a neatly set table, served multiple courses and offered more food even when they could not finish the food on their plates. Middle class members sat at a table and had buffet-style rice and beans.

Lower class members stood in line to get their food and were harassed or frequently told to move to the back of the line. When they eventually reached the front, they were given a spoonful of rice in a napkin. Some were given smaller portions of rice to represent the parents who take less food for themselves to feed their children. These students also sat on the floor amidst crumpled newspapers.

“This is my first time attending this event. I knew that it was obviously going to discuss hunger and stuff between classes, but I didn’t know we would be separated,” said Jennifer Daniel, freshman. “I think this was a really good event because it demonstrated inequality between classes and how people experience food.”

Students sitting at the upper class table said they felt awkward and guilty watching so many people sitting on the floor or waiting on line for their food.

“I just kept feeling upset because you can give all this food to them. It’s hard to see how they’re eating and their conditions. It makes me feel like I can really do my part in giving them what we’re eating,” said Michele O’Besso, freshman. “And I think this is definitely an eye-opening experience to know that not everyone has this luxury of eating at the table and getting served food and getting the option of seconds.”

Hannah Eberle, freshman, was seated at the middle class table and noticed how few options were available to them.

“We take a lot of stuff for granted,” she said.

Students in the lower class also called the event eye opening and felt the impact of being side by side with people being treated so much better.

Sean Farrell, senior, led the groups in a closing discussion on how the activity translates to poverty and hunger in real life, and what students can do to help. Students said that they could raise awareness about the issue, donate excess food, continue to become educated on the issues and take a community-driven approach.

Farrell ended with a quote from Nelson Mandela:

“Massive poverty and obscene inequality … rank alongside slavery and apartheid as social evils. In this new century, millions of people in the world's poorest countries remain imprisoned, enslaved and in chains. They are trapped in the prison of poverty. It is time to set them free. Like slavery and apartheid, poverty is not natural. It is man-made and it can be overcome … overcoming poverty is not a gesture of charity. It is an act of justice. It is the protection of a fundamental human right, the right to dignity and a decent life.”