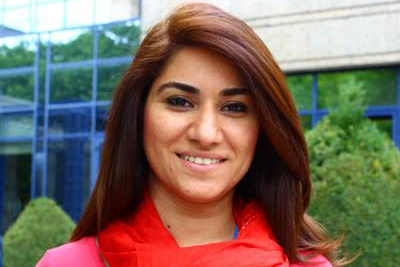 “Sometimes we don’t know our direction in life, and then we find it,” said Professor Aytakin Asgarova, who teaches Environmental Sociology at Ramapo. Asgarova, known as “Ayka,” began her career in medicine, training as a radiologist. She eventually came to realize that she was not living her dream. When she started researching climate change she believed she had found her true calling, a path that led her to Ramapo.

Born in Azerbaijan, Asgarova had an interest in the environment from an early age, even appearing regularly on a local nature TV show. However, at her mother’s urging, she entered the medical field. After her training, she became involved in public health for several years, working on topics such as HIV/AIDS prevention. During this time, she started hearing people talk about a topic she knew little about: climate change.

“My interest was piqued and I began to pay attention. I understood that this was a serious issue upon which urgent global action had not been achieved,” Asgarova said.

She soon learned about the failings of the Copenhagen Conference and the Kyoto Protocol, and saw the devastating effects of climate change on agriculture in her own country. In 2010, Asgarova took action and established the first national civil society organization in Azerbaijan devoted to climate change, the Climate Change and Development NGO Alliance. The organization advocates lobbying on the issue of climate change, promotes renewable energy and collaborates on different pilot projects, working with farmers and businesses. The challenge, she discovered, was how to explain a global issue in an inclusive, non-abstract way.

“You have to talk to people in their own language, in terms of what matters to them,” Asgarova said. “For example, farmers want to hear about how it affects their lives. You have to go beyond handing out flyers.”

Representing Azerbaijan, Asgarova attended the Women’s Earth and Climate Summit in San Francisco, where she met Ramapo Professor Michael Edelstein. They remained in touch and Edelstein informed her about Ramapo’s master’s program in sustainability studies, which Asgarova completed this year. Shortly thereafter, she was offered the position of teaching environmental sociology.

“I’m really thankful for my classmates,” Asgarova said of her experience as an international student. “They had different backgrounds and a lot of passion. I learned something new from them every day. I always got support from Ramapo.”

Asgarova’s focus has been on climate diplomacy, using a climate-friendly approach to solve and prevent conflicts. While teaching at Ramapo, she continues to be one of the key regional representatives collaborating within the European Union climate action process. Recently, she asked her students to participate in “Climate Day,” in which they engaged in discussions all over campus on the topic of climate change.

“There’s always a solution. You can change your habits and lifestyle. You can get into recycling and organic composting. Talk to people, read, write emails and look on social media. Never think ‘I can’t.’ Students can get mobilized,” Asgarova said.

To learn more about climate change, students can visit the following websites: NASA, the UN, the EPA, Greenpeace, 350.org, WWF (World Wildlife Federation), and Climate Action Network. Asgarova can be reached via email at aasgarov@ramapo.edu, on Twitter @AytakinPeru, or in her office, G-220.