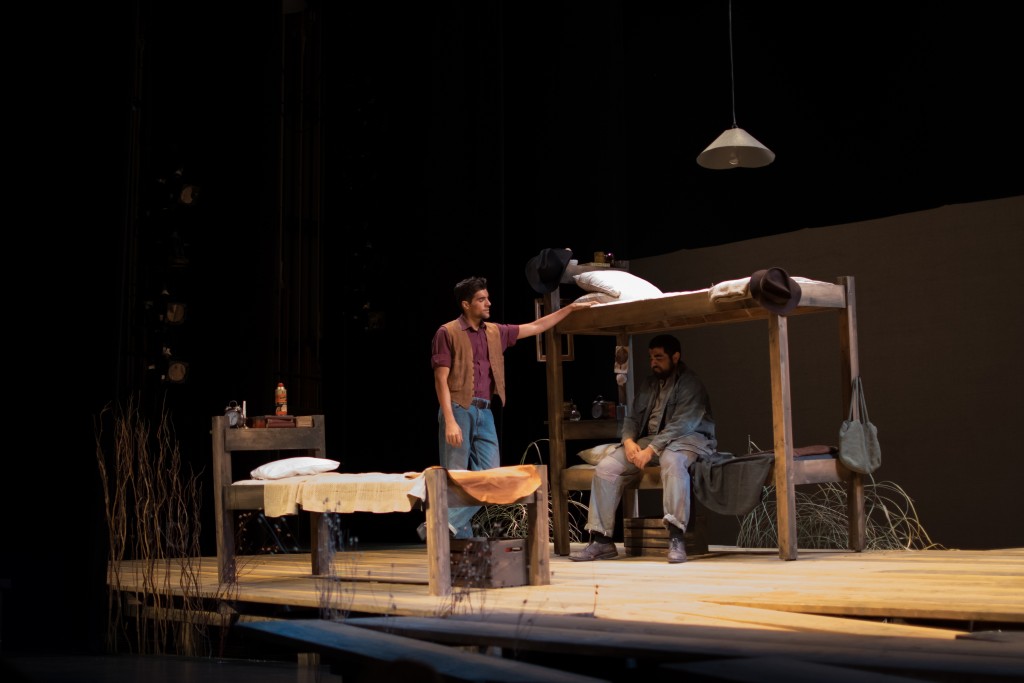 Crowds filled the Sharp Theater on Friday for the opening of the Ramapo College Theater Program’s interpretation of “Of Mice and Men” by John Steinbeck. Directed by Maria Vail and performed by Ramapo students, the play is a gripping and heart-string tugging rendition of the 1937 novella.

Set in the same time period as when Steinbeck wrote it, the story follows the journey of Lennie Small and George Milton. The two have been together since they were young and now, as grown men living in the middle of the Dustbowl during The Great Depression, the two best friends stick together while moving around California desperate for work and money. George is a small but determined man with a lot of brains, while Lennie is the exact opposite. Lennie’s mental disability often leads him into big trouble and George makes it his job to keep the two of them alive and well; even if that means they must run from farm to farm.

The story’s background allows many deeper stories to be told, from tales of friendship and hard work to tragedies of sacrifice and harsh realities. These poignant themes are still important in life today. Also, all of the actors played their characters extremely realistically and were able to convey their stories well.

Junior Nicole Gallin, who played the role of Curley’s wife, said, “I would say that what I wanted to portray in my part is that double standards are still very much prevalent today.”

“Curley’s wife is lonely and just wants to be loved and accepted by everyone else, yet she is called all these terrible names behind her back and seen as a tart for simply wanting interaction,” Gallin continued. “She doesn't even have a name and I feel like Steinbeck was trying to show that she is just her husband’s property and doesn't deserve to be treated the same. Even though the story was written so long ago, the issues are still around today.”

The audience felt the intense gravity of the play as well and was entranced by the beauty and meaning of the whole thing – performance-wise and aesthetically.

Sophomore Andrew Wild was a part of the crowd on Friday night. He said, “The actors were superb and I especially liked the actor who played Lennie. The play was helped by the excellent lighting and I am glad it held close to the authenticity of the book.”

The actors definitely had a wonderful time being a part of such a moving and significant narrative. Sophomore Richard Bruno was especially honored to play the role of Slim because he was the understudy who had to fill in for a sick cast member, Jack Waller.

Bruno said, “It was a challenge memorizing my lines in just three days, but it honestly paid off because I got to work with such an amazing cast and crew.”

About his character Bruno said, “Slim is the ‘nice guy’ in the play. He is the mature, negotiable and trustworthy friend that understood George's situation with Lennie.

“I hope that the audience knows Slim as the man who kept the ranch and all its workers stable and secure. He is the one with all the right answers and knows how to fix any problem,” Bruno said. “I want the audience to know that after the whole conflict with Lennie, Slim will make sure that everyone, including the ranch itself, is okay.”

The show wraps up its second weekend of performances this Friday, Saturday and Sunday at 8 p.m. Tickets can be purchased ahead of time or at the box office – $5 for students and $15 for general admission. As always, it is a bittersweet time for the production team for another play to see its end, but all agree – including the audience who have seen it – that it was an amazing experience.

Junior Alex Luckenbaugh, who played the Boss, said, “My role doesn't have a large amount of time onstage, but that meant I had time to take an observer's role and watch my fellow actors work.”

“It's amazing to see how the dynamics have changed between the first rehearsal and the performance, more so than in some other shows I've done here. Because of the large group scenes, almost everyone has a scene that they are onstage with everyone else, so it was fun to see how the relationship grew between the different pairs of people,” he continued. “So for me, my favorite part of the show was how close everyone became as a cast and I will never forget the amazing experience I was a part of.”