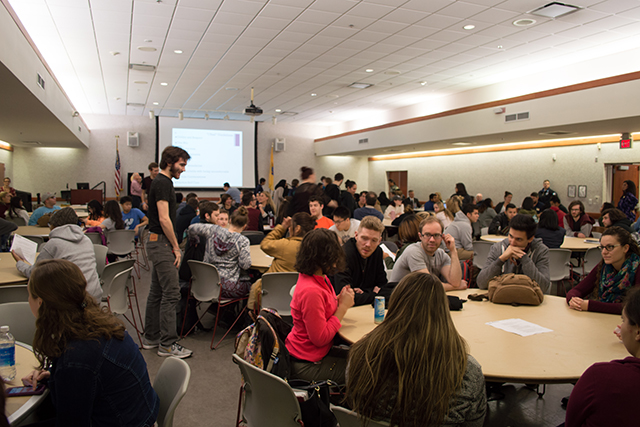 The Center for Student Involvement, also known as CSI, and the Counseling Center created a safe space on campus for the Ramapo College community on Nov. 17 to share concerns related to the unprecedented presidential election.

“We had an election last week and a lot of folks have been expressing a lot of different feelings, thoughts and opinions about what the results may mean. We wanted to give a place for people to come and talk about things,” said Rick Brown, Director of CSI.

As the first in a series of events, “I Feel” encouraged students, faculty and staff to reflect on their range of emotions following the election and seek support from the Ramapo community. For the first few minutes, attendees engaged in a short dialogue about their reactions to the election results with those seated around them.

“I found myself thinking in ways that I hadn’t expected to think. I’m an immigrant but I’m in a position of power compared to most immigrants,” said Ramapo College President Peter Mercer in the small group discussion. “Yet I still felt apprehensive about some of the things said during the campaign as a result. I think an awful lot of people situated differently would feel much worse.”

Moderators Marianne Dunn, psychological counselor at the Counseling Center, and Ebony Jackson, coordinator of the Women’s Center, opened the floor to the larger forum where individuals could share their personal thoughts or themes from their group conversations.

“One of the things we talked about at the table was how embarrassed we are. I am mortified that Donald Trump is going to represent me when he travels to other countries, following on the heels of President Obama who was so classy and elegant. I’m just mortified,” said adjunct professor Kathleen Shannon.

Students identifying as a part of minority groups found the election of Trump as the 45th president of the United States to be a dose of reality.

“With Trump winning, it’s sort of like I don’t know who to trust. I don’t know if people giving out a helping hand are doing it because they feel bad and they know they [are] good, or if it’s really genuine,” said senior Larry Griffin. “It’s hard to seek help from someone that’s probably not exactly like you. It’s hard to trust that genuine help.”

Throughout the campaign, Trump pushed for the registration of all Muslims in a government database as a part of the nation’s counter-terrorism effort. Since winning the election, members of his team have released statements indicating that the Trump administration will not rule out the formation of such a database.

Adopting this type of Islamophobic attitude, a wave of hate crimes rippled across the nation following the election and reports indicate that more than 50 hijabs, headscarves worn by Muslim women, were torn off in the first 24 hours.

“I don’t feel safe anymore,” said freshman Mounira Elsamra. “I know there are a lot of people who will take off their scarves because of it. But I think for me, if someone is going to treat me differently based on what I have on my head, then they are not worth being around me.”

This open forum also allowed for community members to reflect on Trump’s proposed policy plans, or lack thereof. As votes continued to pour in through the early hours of the morning, freshman Caleb Herbst was elected as a member of Ridgewood’s board of education.

“The superintendent was making a comment that the superintendent association would be mailing letters to the president-elect because all of his policies are incredibly vague,” said Herbst. “We are honestly anxious about what will happen to the state of education not only in New Jersey but also across the nation.”

Trump’s open disbelief in climate change made headlines on the campaign trail, not only turning off potential voters but also raising fear among international students who face serious environmental issues at home.

“It was really shocking to see that in a country with literacy rates as high as it is here, with all the things Donald Trump said, with all the racial things and the discrimination that he posed, he still won,” said freshman Amish Regmi, an international student from Nepal. “That’s terrifying to me. Especially the case of climate change because the people in my country and the people in South Asia, where people don’t have access to shelter, where they don’t have access to food, they are going to be most affected by climate change.”

Vowing to return prosperity by “Making America Great Again,” Trump’s plans are under intense scrutiny by individuals who remain doubtful about his ability to advance the nation’s economy.

“I do feel like during the campaign, and even in the first week, signals have been sent out that the feminists, minorities and immigrants are the cause,” said Professor Tae Kwak. “Somehow we are going to resurrect America’s manufacturing instead of investing in education, investing in service sectors, investing in things that will keep us prosperous by moving forward instead of trying to go back, which may be an impossible thing and then we’ll all be in a worse economic state no matter which political party you support.”

Participants in the forum also used the mic as a platform to raise awareness about other issues that have not been brought up in the mainstream discussion. Dr. Michael Alcee, Training Program Coordinator and Counselor at the Counseling Center, voiced his personal concerns about all different kinds of groups, including the male population.

“I feel that it’s important this election to think about what are healthy aspects of masculinity and how they can continue to be encouraged,” said Alcee. “I think on both sides of the spectrum, there’s something important about how certain men feel marginalized and are acting out in the marginalization in unhealthy ways.”

In the midst of all the emotions, there was an overwhelming amount of hope expressed that filled the air.

“I’m optimistic by nature, so I feel hopeful that this is not the end. I wake up each morning saying it’s going to be better,” said Nicole Morgan Agard, Chief Equity and Diversity Officer. “What I have learned from this election is that there are a lot of people who, for whatever reason, chose to vote for Donald Trump and I want to learn more about why they chose, what their reasons are and be respectful in that dialogue, not necessarily have the same hatred that others have.”