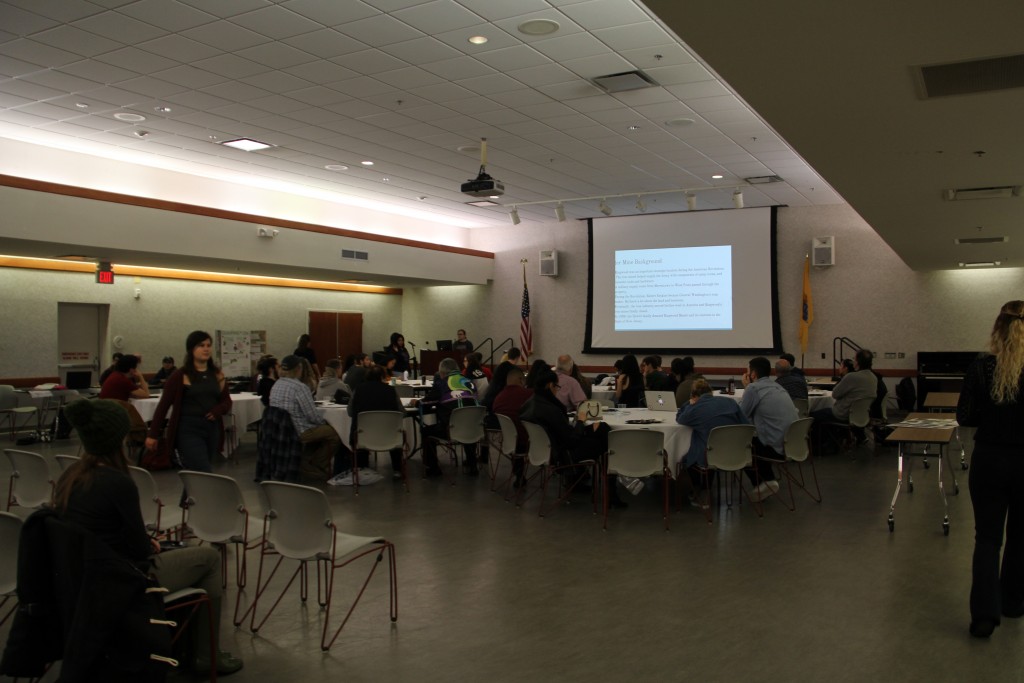 Anthropology classes at Ramapo closed out Native American Heritage Month on Wednesday with a banquet in Friends Hall that highlighted the research that anthropology classes have done in partnership with the Ramapough Lunaape Nation.

The banquet featured presentations from various groups covering the pressing matters that involve the Lunaape Nation and their relationship with the college and the citizens that live near their territory.

“This is our way of bringing awareness to the students at Ramapo, because some students may not know,” said Melanie Rose Intal, a presenter at the banquet.

One of many things brought into awareness was the illegal dumping at Stag Hill. Stag Hill is an area where there are many Lunaape sacred grounds. These sacred grounds that are so cherished by the Lunaape Nation are littered with waste, ranging from hazardous materials, to Solo cups and old tires. During one of the presentations, a video showed a Lunaape burial ground and just a few feet over was a large pile of garbage. The Lunaape are seeing their territory being buried under a concerning amount of waste, with no legal action being taken against those who are dumping the garbage there.

However, the volunteers at MEVO, The Mahwah Environmental Volunteers Organization, are helping clean up the vast amount of waste that is cluttering the Lunaape land. The volunteers at MEVO along with the Lunaape are really the only ones trying to clean up this land, as they go through the waste and try and salvage any recyclable materials, and properly dispose of the rest that can be harmful to the surrounding environment.

Lunaape Chief Dwaine Perry believes that the environmental effects of this dumping and littering as a whole should hold the same importance to anyone, not just the indigenous people.

“I think the most critical thing any student at any school can do is become aware of the impact on the environment,” Chief Perry said. “Regardless of where you are and what you attain, you still have to breathe air and drink water and for a very long time, that was a concern only carried by Native people.”

The problem is not only with the dumping itself, but how little help the Lunaape and MEVO get in their efforts to lessen the amount of waste.

“As fast as MEVO can clean it up, people bring more stuff to dump,” Chief Perry added.

Some of the dumps are mistakenly blamed on the Lunaape, according to Chief Perry.

“I don’t think many people realize is that the dumping is done by people outside the community … and the local municipality make believes it’s us.”

One of the presentations showed how the Lunaape nation are often discriminated against treated with a lack of respect.

According to the presentation, one Lunaape site had a swastika carved into it, while other sites have had things stolen from them.

“The only way you can really change that, is through education,” Chief Perry concluded.