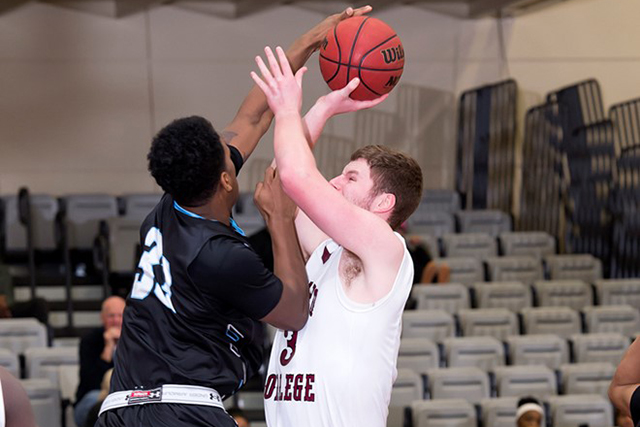 After their first NJAC Playoff Tournament appearance since winning it in 2013, the men’s basketball team is picking up right where they had left off last season, starting the 2016-17 campaign with four consecutive victories, including Monday night’s 45-point win over Medgar Evers.

After taking home the Rick Martin/Holiday Inn Express Tournament in Massachusetts to start the season, followed by their first conference victory of the year at William Paterson, the Roadrunners took down the Cougars by a score of 107-72 on Monday.

Head coach Chuck McBreen said he has very high hopes for this year, the 19th he has been a head coach at the College, but knows there is more work to be done.

“My expectation for this team is really high,” said McBreen. “Based on what we have coming back and what we’ve brought, we’ve shown moments that we look really, really good, and we’ve shown other moments where if we wanna compete with the best teams and be an elite team in the conference this year, then we have to get better.”

Despite what McBreen claims is a lack of “focus” and “consistency,” he said he hopes to be nationally ranked by the time the team travels to Las Vegas.

“We expect to be 9-0 heading into Vegas,” said McBreen. “That’s the goal, that’s the expectation. Anything less than that, I’ll be disappointed.”

The road to a 9-0 start looked alive and well on Monday night, as the Roadrunners were able to put all 18 active players on the court for the game against the Cougars.

Incoming senior center Sultan Aminu came off of his 24-and-9 ball game against William Paterson with 15 points and seven rebounds against Medgar Evers.

“He’s a great addition to this team, but he’s another one when we talk about consistency,” said McBreen. “Just like we need Tommy [Bonacum] to go, we need him to go. If both of them are going like they were at William Paterson, we’re a difficult team to play against.”

Bonacum  helped out the Roadrunners’ cause on Monday night, dropping a team-high 18 points and grabbing seven boards of his own.

Junior forward Christopher Moseley dropped 15 points of his own, including a thunderous slam dunk in the second half.

Freshman guard Connor Romano put up his first double-digit effort in his career, dropping 12 points against the Cougars, including a couple of three-pointers.

The Roadrunners defeated Montclair last night by a score of 86-58 and will face the Stockton Ospreys on Saturday at 1 p.m.

It will be their first home conference game of the season.

“If we just make the commitment to practice hard and give 100 percent, give your best every day, when you cross the lines, it’s your two hours of sanity to play ball,” said McBreen.