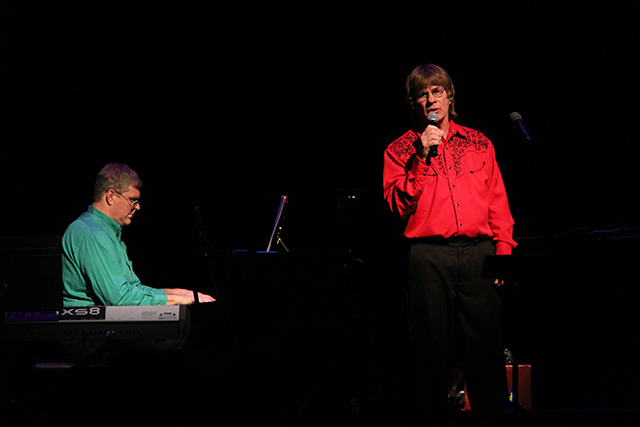 Selections from popular folk musician John Denver’s catalog mixed with traditional holiday songs played in the Berrie Center’s Sharp Theater on Saturday night, during a concert dubbed “A Rocky Mountain Christmas.” The performance centered on award-winning guitarist and vocalist Chris Collins, who was backed by the band Boulder Canyon. The large audience sat before a stage decked in scarlet drapes and bunches of poinsettia flowers, in between which the band played, pausing occasionally to switch instruments. Collins himself – a man on the far side of middle age with the long, thick hair of a teenager – paused frequently between songs to deliver folksy, anecdotal jokes with innocuous punch lines.

Focusing heavily on his most well known songs, the concert paid homage to Denver, a man considered to be one of the most influential songwriters of the '60s and '70s. Collins, who both looked and sounded uncannily like the deceased singer-songwriter, delivered covers of hits like “Take Me Home, Country Roads,” “Rocky Mountain High” and “Annie’s Song” earnestly and skillfully.

An unabashed exercise in nostalgia, “A Rocky Mountain Christmas” dwelled in the past during its two hours onstage, as Collins reflected wistfully on days gone by in between songs. His audience, who clapped thunderously after each number concluded, appeared to share his love for a seemingly simpler time.
Collins’s backing players displayed consummate levels of musicianship. Alex Mitchell, a multi-talented instrumentalist who was featured on the soundtrack of Ted Turner’s 1993 “Gettysburg” film, switched seamlessly between the mandolin and fiddle throughout the evening’s performance. Six- and 12-string guitarist Paul Swanton replicated Denver’s famous rhythms with apparent ease.
The concert switched gears following an intermission. While the first half of the act was characterized by loud, rousing songs, the latter portion of the show focused on slower tunes and carols including “White Christmas” and “I’ll be Home for Christmas.” Pianist Bill Powell, hunched over his piano like Shroeder himself, indulged in the “Linus and Lucy” theme of 1965’s “A Charlie Brown Christmas” TV special.
“A Rocky Mountain Christmas” ended on a high note. The band, having left the stage, quickly returned for an encore performance of “Thank God I’m a Country Boy” and an a cappella rendition of “Have Yourself a Merry Little Christmas.”
Collins and company gave their audience a night to remember, allowing attendees to enjoy live the music of a long-dead singer-songwriter whose work is still loved today. The Berrie Center's Sharp Theater will feature two more holiday-themed concerts in the coming weeks: "Channukah, The Festival of Lights" will take place on Dec. 10 at 8 p.m. and "Eileen Ivers: A Joyful Christmas" will take place on Dec. 11 at 3 and 7 p.m.
syunker@ramapo.edu