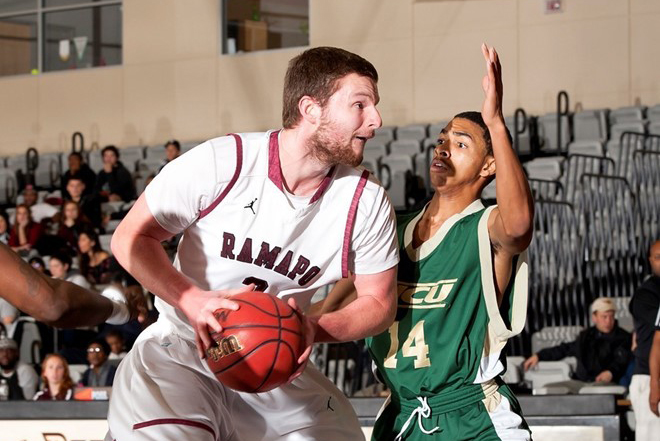 The Ramapo College men’s basketball team is off to a tremendous start. Their 3-0 conference record and 6-0 overall record has them seated atop the NJAC standings.

Most recently, against conference foes Montclair State and Stockton University, the Roadrunners have outscored their opponents 172-127. The points are coming in bunches for the squad, and led by junior Tom Bonacum, the team shows no signs of slowing down. As promising as the start has been, head coach Chuck McBreen stresses the downfalls of complacency.

“Positives are that we are still undefeated and still have a ton of room for improvement,” said McBreen. “If we want to do special things this year and accomplish all our goals, we need to work harder in practice every single day.”

For all the success the Roadrunners have experienced, it can quickly be undone if improvements are not made.

McBreen highlighted the career night for Bonacum, who not only put up a career high in points with 33 in Saturday’s win against Stockton, but also posted a double-double with 16 rebounds to go along with five steals.

“He flat out carried us at times during that game, when we were struggling,” said the head coach.

Bonacum’s night was certainly memorable, but McBreen acknowledged the need for consistency and focus during a long and grinding season. While the numbers are impressive, McBreen will continue to look for contributions from his entire team to ensure success as the season progresses.

“Our goals are to work hard and get better everyday and to take one game at a time and put all our focus into that game,” said McBreen.

In order to sustain success, McBreen sees consistency and a dedication to getting better everyday as keys to the season.

In addition to Bonacum, this Roadrunner’s squad will be led by junior Christopher Moseley and senior East Stroudsburg transfer Sultan Aminu, who between the two, average about 29 points per game. Moseley’s 21 points against Stockton was the second-highest game total, behind only Bonacum.

McBreen stands by the adage that defense wins games, and this remains the focus of his team.

“We focus on our defense as the top priority everyday and we have shown a great deal of improvement, but have to become more consistent with it throughout the entire game.”

So far, McBreen’s team has contended and largely outplayed every team on the schedule. Their closest game was decided by eight points.

As the season moves on and they travel to Las Vegas for the D3hoops.com Classic over winter break, McBreen and his team must show that their defense is just as capable as their offense of carrying the team to a postseason NCAA Tournament berth.

After last night’s 68-46 victory over Rutgers-Newark, the Roadrunners will face Kean on Saturday at the Bradley Center at 3 p.m.