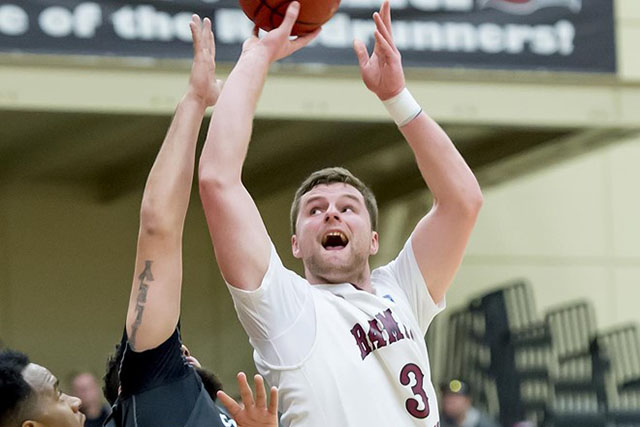 Entering last Wednesday’s game vs. Montclair State, junior forward Thomas Bonacum needed 18 points to join basketball’s elite 1,000th point club. With six minutes and 30 seconds remaining in the second half, Bonacum was just one point shy of the milestone. As he drove to the basket, he was fouled by Montclair State’s Brandon Channer. He stepped up to the line with the fans on their feet watching intently as he sank the first foul shot, making him the most recent member to score 1,000 points in a Ramapo basketball career.

“This means a lot to me. I was a few shy in high school and it is a huge honor to be one of 20 players in the school’s history to reach this milestone,” Bonacum said.

However, accomplishing something of this much importance does not come without lots of hard work and lots of teammate support.

“I have worked hard each year and I owe a lot to my teammates. I could not have gotten to this point without their help,” Bonacum said.

“I would define my work ethic out of season as focusing on my weaknesses and improving in areas where I struggled in years past,” said Bonacum. “In season I focus more on staying healthy and injury free which I’ve struggled with throughout my career.”

Bonacum is not only a positive presence on the court but in the locker room as well, according to his teammates.

Junior point guard Jimbo Long said, “Having Tom is great. We know each game that we have someone that not every team we play does and we try to take advantage of that.”

Other teammates seem to feel the same way.

Fellow guard Josh Ford said, “He doesn’t care how much he scores, he just wants to win.”

The Roadrunners are currently 19-1 and sitting atop the New Jersey Athletic Conference with a 12-1 record in conference play. With five games remaining on their schedule, they are hopeful they can continue their success and capture their first NJAC regular season and NJAC tournament championships since the 2012-2013 campaign.

Coach Chuck McBreenmis is in his 19th season as the Head Coach of Ramapo College and this is certainly one of his better ones.

“Just looking up at the banners on the wall each day inspires me to know that he’s been there and understands what we need to do as a team to get to that point,” Long said.

Due to the fact he has been doing this so long and has been so successful over the years, his players have a lot of respect for him. According to Ford, the main thing that McBreen preaches everyday to his team is that, “Tomorrow isn’t promised. At any point in your life the game that you love can be taken away from you.”

The Roadrunners have three more home games at the Bradley Center this season. They host Rutgers-Newark on Feb. 1, Rutgers-Camden on Feb. 8 and the only team to beat them so far this season, New Jersey City University, on Feb. 11.