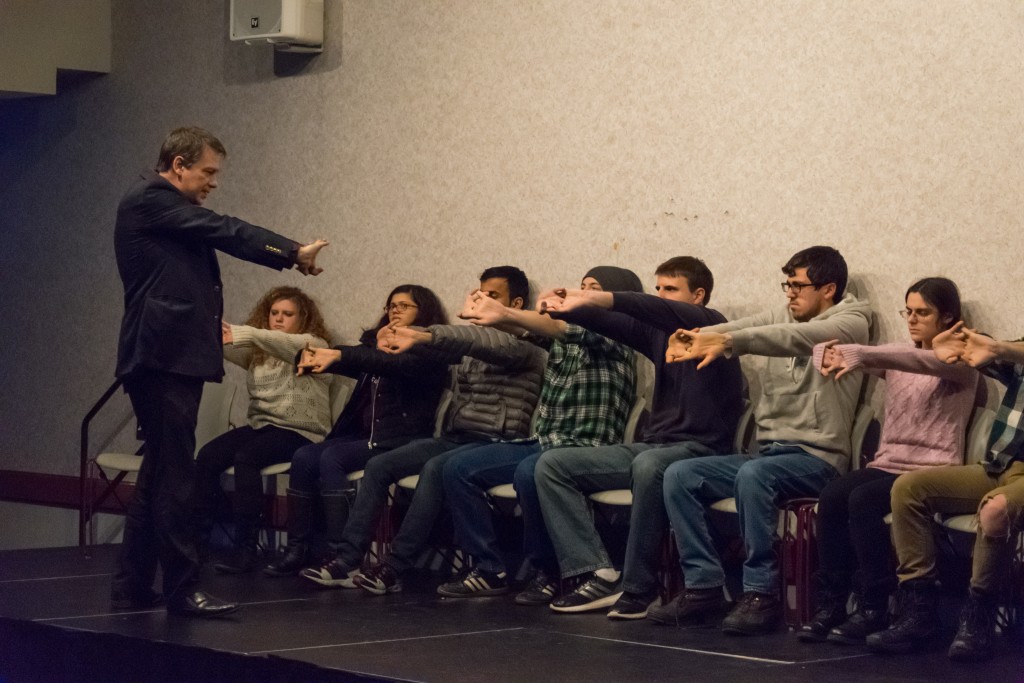 A hypnotist performed at Friends Hall on Tuesday night, delivering an interactive performance in front of more than 100 students who helped themselves to Chinese food provided by the College Programming Board in the back of the room.

The hypnotist greeted the audience and introduced himself as Larry Volves before explaining to the crowd that his specialties were hypnosis and mentalism. He explained onstage that mentalism is the practice of persuading a subject to do something they would not ordinarily do. He announced through his microphone that he has appeared on television a few times and that he once managed to hypnotize a few subjects in a show in Tokyo, Japan using only a translator on his phone. Volves warned the audience that nothing considered crazy or scary would take place during his performance.

“I loved it so much and I thought it was incredible,” said freshman Colette Barca.

“It is one of those things that you never really believe until you experience it. Because I participated so many times throughout the show, I now fully believe in the power of hypnosis,” Barca continued.

“I didn’t participate on stage, but I had so much fun at the show,” Kim Evans, a freshman, said.

For his first act of the night, Volves asked everyone in the audience to close their eyes. When the majority of the crowd had complied, Volves tapped the shoulders of 12 students in the audience, who then gathered up on stage.

For the first half of the show, Volves simply asked the participants to relax and enter a deep sleep. They then obeyed every order Volves asked of them, no matter how silly the command seemed to be. The hypnotist asked the students to act like Martians, so they could deliver a message in an alien language, and they did. Three students on stage made strange noises with their mouths, indicating that they were speaking “Martian.” The hypnotist also convinced senior Jonathan Laskoski that the number eight did not exist, until he snapped his fingers and allowed Laskoski to recall the number eight.

Laskoski was a little skeptical before getting on stage, never believing in hypnotism, but his stance quickly changed after his on-stage experience.

“I felt very open to suggestion and was willing to do stuff that I wouldn’t dream of doing in real life,” Laskoski said. “The laughter of the audience made me even more relaxed.”

After realizing that he had indeed been hypnotized, Laskoski did not remember much of what he said or did, so he had to ask some members of the crowd.

“It was interesting to hear what everybody told me I did; it was kind of funny. Someone told me I even tried to take my shirt off, but the hypnotist told me to keep my clothes on,” Laskoski concluded with a smile.

Volves even convinced one girl that her belly button was missing, which capped off what seemed to be a successful show.

“The hypnotist was really funny, and overall it was a great night to just have a laugh with my friends. I would definitely go to another event like this,” Evans said.