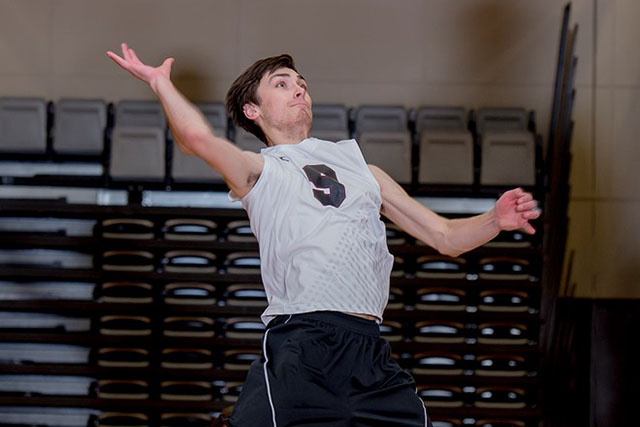 The Ramapo College men's volleyball team hosted a tri-match this past Saturday, one of many that the Roadrunners will hold this 2016-2017 season. The home team suffered their first loss of the year to Stevens Institute of Technology, yet went 1-1 for the day with their win over Medaille College. The split put Ramapo at a record of 4-1 for the season thus far.

Stevens Institute of Technology was the Roadrunners’ first match of the day. Stevens, ranked #3, posted a 3-1 defeat over Ramapo taking the first set 25-18 and both the third and fourth sets 25-17. However, the Ducks dropped the second set, making Ramapo the first team to hand them a set loss this season. Although Stevens still remains undefeated in matches for the start of the season, junior opposite/setter Garrett Fitzsimmons feels that winning even one set against Stevens speaks volumes, “If we can hang with Stevens then we can hang with anyone.”

Fitzsimmons led the Roadrunners’ defense collecting seven digs. Teammate Mikhael Erushalimski led the team with 34 assists and four blocks. Roadrunner Justin Feigeles earned Skyline Men's Volleyball Player of the week after he averaged a team-high of 4.43 kills per set; 18 against the Ducks and 31 total for the day. Nick Amos added eight kills as the team posted a combined 41 kills on 101 attempts and 23 errors.

In the final match-up of the day, Ramapo swept Medaille College 3-0. Ramapo won each set 25-18, 25-20 and 25-21 respectively. Feigeles, who recorded an impressive 13 kills and two aces once again led the Roadrunners in the match. Fitzsimmons posted nine kills while Senior Captain and outside hitter Connor Brandow collected six of his own. Amos led the team with four total blocks while Brandow and Erushalimski each added two for a combined total of eight for the Roadrunners.

Sophomore libero/defensive Terrence Cando posted a season high 10 digs while fellow Roadrunner Erushalimski dished out a team high 29 assists for the match. Ramapo combined for 39 kills total and went .222 in their win against Medaille.

The Men’s Volleyball Team will be back in action this Saturday when they host Baruch, Lasell and Stevenson at Ramapo for another tri-match starting at 11 a.m. in the Bradley Center.