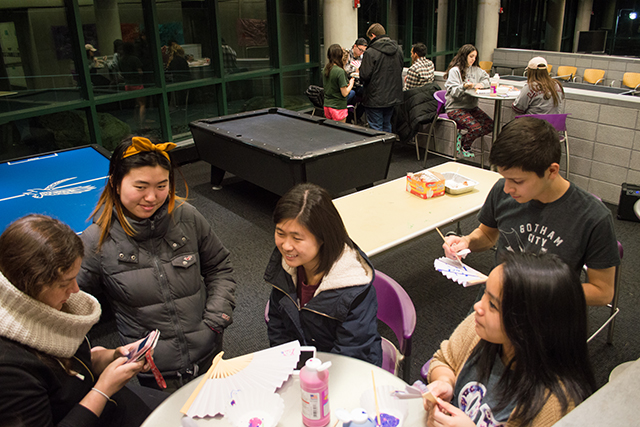 Festive cheer and laughter filled the Overlook Hall first-floor lounge during their Chinese New Year celebration hosted by Resident Assistant Rachel Lubitz. Students from all over campus came out to ring in the Year of the Rooster, which is celebrated in many Asian countries, on their very own campuses.

"I have been celebrating the Chinese New Year ever since I was a kid,” said Lubitz, “so I held this event so that I could celebrate a holiday that is very dear to my heart with my residents while teaching them about some of my favorite Chinese customs.”

The main draw for the event were the paper fans that people could customize. Paper fans are a traditional piece of decoration in Chinese culture. Paint and brushes were provided to students to allow them to take their own creative approach on their fans.

Lubitz explained her selection of Chinese paper fans: “I chose paper fans because the floral designs are so beautiful, and I feel that they are iconic to the Chinese culture. I thought residents would enjoy the education aspect more by decorating their own fan and at the same time, have fun by adding their own personalized touches.”

Marion Fabella, a sophomore, is a resident at Overlook Hall who came down to enjoy the festivities with her RA.

"Painting paper fans at Overlook was a different kind of event but a fun experience for Chinese New Year,” she said.

Fabella continued, "I am glad I went to this celebration by RA Rachel. It was fun painting fans and getting to keep them afterwards."

In addition, everyone helped themselves to the Chinese take-out that Lubitz ordered for the event. A typical college favorite on the menu was chicken and broccoli with white rice. Students finished the two trays in a matter of minutes.

For an authentic Chinese New Year meal eaten during traditional celebrations, foods like noodles and sticky dumplings made an appearance. Noodles, due to their long length, are eaten to symbolize longevity. Dumplings are eaten because they look like little parcels of money, which symbolize wealth and good fortune.

At this event, people got to mingle and bond with each other while immersing themselves in some Chinese culture. Many sang along to the Disney “Mulan” movie soundtrack that was playing in the background.

Princess Claveria, a sophomore, said, “It was cool spending time with friends while painting paper fans and listening to music. I normally don't celebrate Chinese New Year so I'm glad I got to learn more about the holiday."

Although this event did not cover all of the traditional customs of the holiday, it offered a taste of what usually happens. Some main festivities that occur during Chinese New Year include lion dances, setting off firecrackers and giving out red envelopes full of money and good luck to loved ones.

Lubitz was happy with the turnout of her gathering.

“Overall, I think the event was a success and everyone had a great time,” she said.