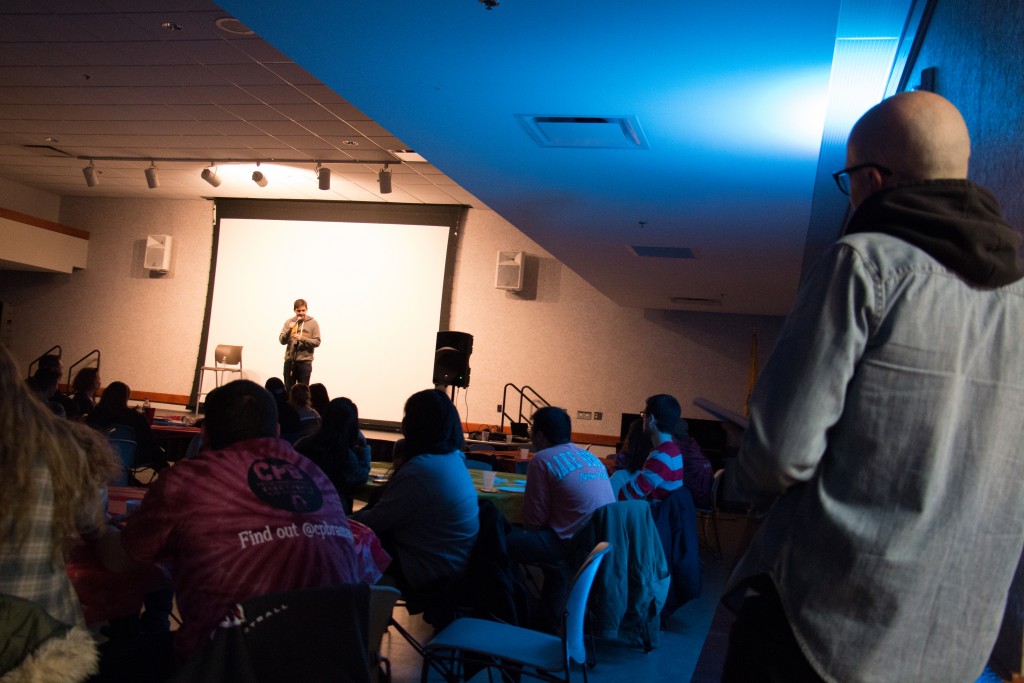 Last Thursday, the College Programming Board hosted Comedy Night. The evening featured three comedic performances and the announcement of the annual CPB Spring Show. The show began with Chris Cortez, Ramapo College senior and CPB co-president, as one of the opening acts. Cortez performed a quick stand-up routine to get the night started and warm up the audience for the performance ahead. The next opening act was Sam Evans, whose high-energy set kept the good vibes high and the laughs coming, all in preparation for the night’s main event: Alex Stone.

Stone, a New York comedian and Ramapo favorite, came barreling out the gate with a slew of new jokes for those who had seen him in his last Ramapo appearance and some old favorites as well.

“In his past performances he was drawn really well. He can really relate with the college crowd,” Jacob Fishman, sophomore and CPB music co-chair, said when asked about the decision to bring Stone back to Ramapo.

Stone performed an hour-long comedy set that was full of laughs. His show was interactive and included opportunities for the audience members to participate in the show.

“[Stone’s] sense of humor just clicks with everyone,” said Fishman.

That statement can certainly be held true, being that students of many different ages and backgrounds were pleased with Stone’s performance.

“There were a bunch of reasons that I really loved [Stone]. He was relatable, he was funny, but he was over-the-top in a way that made even everyday situations hilarious,” said Brandon Smith, a senior at Ramapo who attended the show.

Although Stone headlined the show, the other performers did not disappoint according to audience members.

“All three performers were extremely funny in their own right. After a long week, it was nice to sit back, relax, and laugh until my cheeks hurt,” senior Christine Darakjy commented.

At the end of the night, CPB announced the performers for their annual spring show. This year’s show will feature comedians Pete Davidson and Nasim Pedrad, both made popular by their performances on “Saturday Night Live.” While this show is a little different than what has been done in recent years, the CPB E-Board members have voiced their confidence in the selection and their hope that students will come out and support it.

“I was surprised to see that the Spring Show was not going to be a concert for the first time in a long time. While I'm disappointed because I had been looking forward to a musical act, the two comedians that CPB chose are both pretty well known, and I have a feeling they are going to be hilarious,” Smith commented when asked about the reveal.

Smith’s opinion seems to be fairly common among students, who are hopeful for the outcome of the show despite it being different from years past.