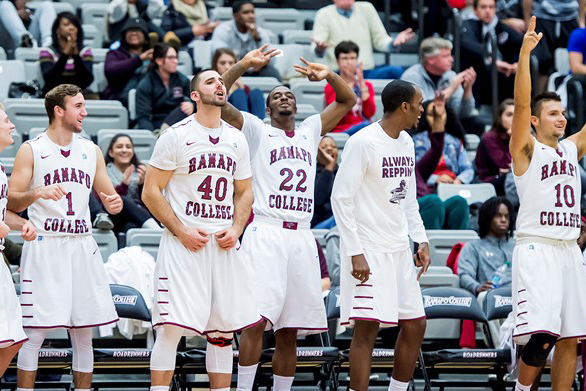 The Roadrunners posted an eight-point victory over the Gothic Knights of Jersey City University on Saturday to clinch the NJAC. Ranked #11 on D3hoops.com's Top 25 poll, the Ramapo men's basketball team took the #1 seed, granting them a first round bye in the post-season conference tournament. With the 78-70 home victory, Ramapo improves to 15-2 in conference play, as NJCU drops to 12-5. The teams now sit at 22-2 and 18-6 respectively for their overall records.

At the start of the game, NJCU took the lead 5-0, and then increased it 11-2. However, it wasn't long before recent 1,000 point club member, Tom Bonacum, started what would lead to nine consecutive points made by the Roadrunners, making the game 13-10. NJCU worked back to tie it at 13 until freshman Patrick Peterson netted a three-pointer, inciting a 10-point lead for Ramapo. A tight game the entire half, the Gothic Knights fought back to close the gap 20-24, and the buzzer sounded with the scoreboard showing 36-30, Ramapo. Peterson led the team in the first with 10 points as both he and his teammates made 57% of their shots taken, while NJCU only hit 33% of theirs.

In the second half, the teams came out just as competitive as they had in the first. Bonacum started what would become a five-point run to give the Roadrunners the go-ahead, 47-40. Shortly after, the Gothic Knights came back with six points of their own to make the score 47-46. Both teams would regain the lead throughout the half; Ramapo answered back with six points to take it 53-46, and NJCU responded by netting 10 points to go ahead 67-66. With a little over a minute left on the clock, junior Josh Ford made a final free-throw to secure the game at 78-70.

Ford was an essential, key-player in the win for the Roadrunners, posting 13 points in the second, leading the team with 15 points overall and going 9-10 from the free throw line. Bonacum and Peterson each contributed 14 points to the 78-70 win.

"I just wanna thank my teammates for always motivating me day in and out," said Ford. "I couldn't picture playing with anyone else but these guys. We must continue to focus and work hard day by day to reach our goals."

The Roadrunners will be back in action with home-court-advantage when they host a semi-final matchup at the Bradley Center on February 21st.