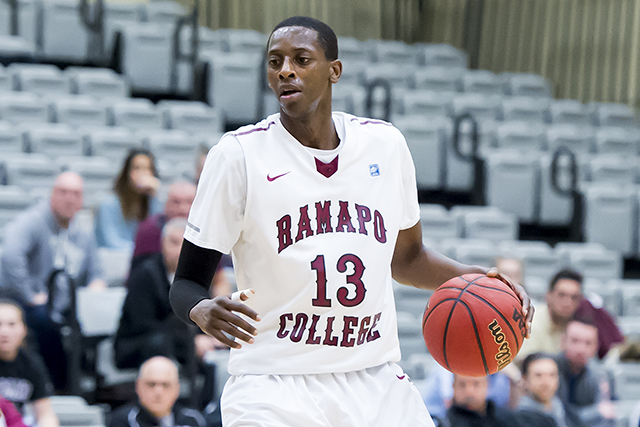 The #1 seeded Roadrunners hosted the #4 seeded Rowan Profs in a semi-final game on Tuesday night. Ramapo scored a season high 110 points in the victory. With this win they improve to 24-2 overall and 16-2 in the conference. They are now one win away from their fourth NJAC title and first since the 2012-2013 season. The NJAC championship game will be held Friday night at 7 p.m. when Ramapo takes on the Gothic Knights of New Jersey City University. The two teams split the regular season series while the home team came out victorious each time.

The Roadrunners were led by Thomas Bonacum and Chris Moseley, who both posted double-digits. Moseley led all scorers with 24 points overall, while Bonacum added 16 of his own. The two of them tied for a game high with 10 rebounds apiece. “We all just knew what was at stake and didn’t want this to be our last game,” said Moseley.

Ramapo scored nearly half their points courtesy of the free throw line. The Roadrunners shot just under 75% as a team, making 48-65. The 65 attempted free throws shattered their season high of 39 set back in November against Colby Sawyer College. As for free throws, they made 19 more free throws than any other game this season. “Scoring that many points from the line was huge. It was a tightly called game by the officials and we really took advantage of it,” said Bonacum.

Ramapo had to fight through a lot of adversity after allowing Rowan to close the first half on a 10-0 run. With five seconds left in the first half, Rowan’s Daron Curry hit a three-pointer. This three broke the tie at 47 and gave Rowan the advantage going into the locker room. However, the Roadrunners came out of halftime with lots of energy and focus. Ramapo regained the lead after a Patrick Peterson three-point field goal, making it 60-57 with 15:29 left in the game. With that lead, they never looked back. The had at least a five-point lead for the the rest of the game.

“Coach got on us for our effort in the first half and we really preached to one another that we have come so far and worked too hard to lose this game. It all had to start on the defensive end,” said Bonacum. The key defensive stops early on in the second half allowed Ramapo to regain the lead that resulted in a victory.

Ramapo will have to really work for their points in this upcoming game, as NJCU led the conference during the regular season in points allowed with 64.4 points per game.

“The biggest factor against Jersey City is going to be our offensive execution because of how great their defense is,” said Moseley. The winner of Friday night's NJAC Championship game will receive an automatic bid to the NCAA Championships with the location to still be determined.