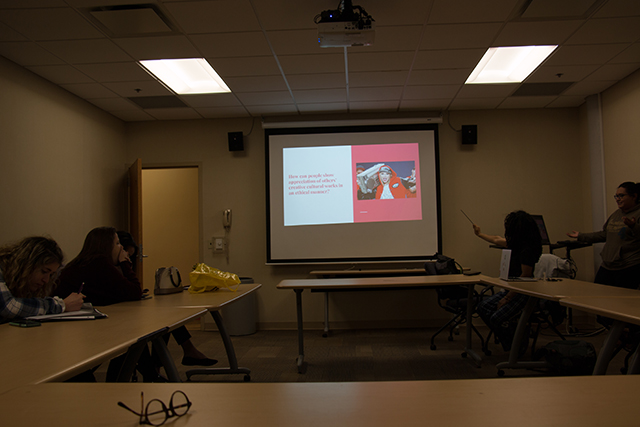 Culture is a major component to a person’s identity, which is why cultural appropriation is a huge issue in society. The Office of Equity and Diversity stressed this in their Coffee Talk on Wednesday night as a part of African Ancestry Month.

The event opened with a viewing of actress Amandla Stenberg’s video, “Don’t Cash Crop my Cornrows,” about cultural appropriation. The video featured Stenberg discussing how different areas of culture, especially black culture, are appropriated, particularly by white celebrities. Miley Cyrus, Macklemore, Katy Perry and the Kardashians were a few of the stars Stenberg accused of stealing from black culture. She also emphasized that many of these artists, while quick to steal from black culture, are not as fast to defend it. For example, she pointed out how many celebrities choose to remain silent on black issues like police brutality.

After viewing the video, participants were free to discuss their opinions on cultural appropriation. Maria Martinez, sophomore, led the Coffee Talk with thought-provoking questions and statements. A majority of the conversations revolved around how mainstream entertainment appropriates different cultures.

“Celebrities are really quick to use things from the black community but don’t speak out when it comes to black people being killed on the streets,” said Martinez.

Berly Rivera, junior, was quick to agree, stating, “They just make their money off of appropriation. They’re not down to fight but they’re down to make money.”

Celebrities appropriating culture have a severe impact on society in general, many of the Coffee Talk participants pointed out. When people take aspects of other people’s culture, they reinforce stereotypes and ignore underlying issues.

For example, hair was a major topic of conversation in both the Stenberg video and the group discussion because hair plays a major role in black culture. Society, however, has deemed these hairstyles as unprofessional and ghetto. This leads to black people not being able to get jobs due to the stereotypes these hairstyles carry. When white celebrities wear their hair in these styles, though, people view it as high fashion or edgy, and the stereotype does not carry over.

“It gives the impression that black people can’t own it and when white people do it, it’s pure,” stated Kez St. Louis, junior.

He went on to express the significance behind hairstyles for black culture, stating, “Where my parents come from your hair shows your different identities.”

St. Louis also stated that cultural appropriation is about ignorance.

“First understand where it comes from. People have different experiences with the culture you’re appropriating,” St. Louis said.

Rivera added, “There’s a whole history behind it which you choose to ignore.”

This ignorance is what keeps the stereotypes alive, and what makes cultural appropriation incredibly problematic. It’s about condemning one group for their culture and praising another group for stealing from it.

“We should have been over this,” said Anastasia Caulfield, junior, continuing, “It’s a shame.”