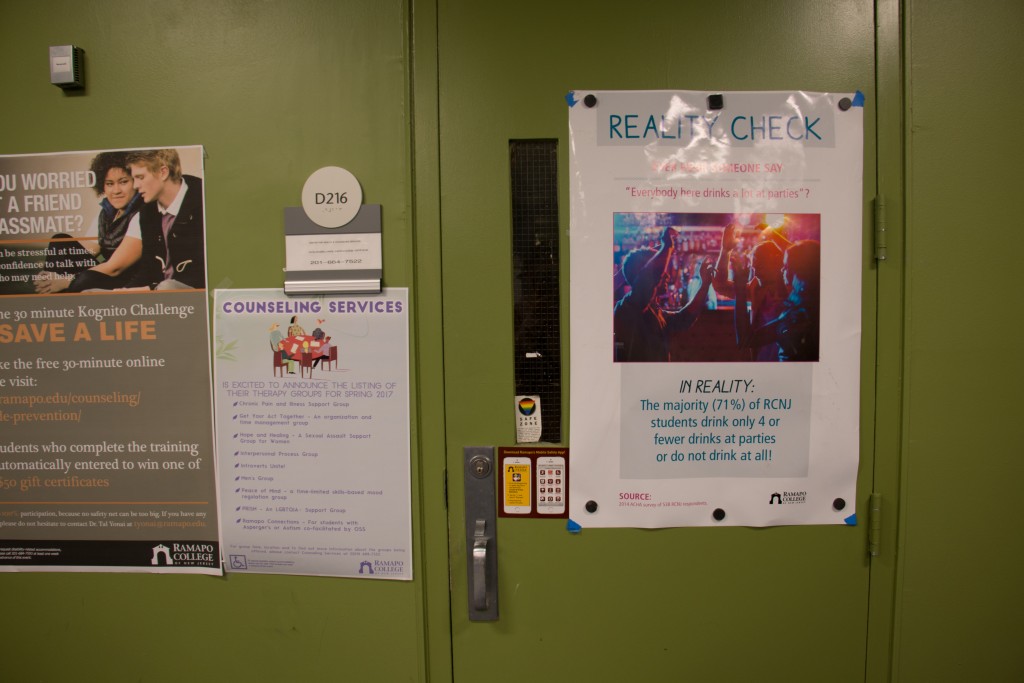 Continuously seeking ways to expand its services to cater to the needs of the Ramapo College community, the Center for Health and Counseling Services, CHCS, introduced the Men’s Group this spring semester.

The Men’s Group is a confidential space organized by a trained psychologist to discuss and explore what being a man means in all aspects of modern day society.

“The idea of opening up a freer space for men to talk about all sorts of facets of their experiences is something that I have seen on an individual and group level not just at Ramapo, but in the culture,” said Dr. Michael Alcee, psychologist and training coordinator at CHCS, as well as facilitator of the Men’s Group. “It seems like men are sometimes challenged with how to bring the various sides of themselves out with the evolving definitions of masculinity.”

Masculinity is a comprehensive term that can be hard to digest for many. Referring to a set of ideals traditionally associated with men, these characteristics are constantly redefined by society.

“What’s more important than having a static definition is to have a dynamic and evolving reflection on what masculinity is, what it has been, what it could be and what you want to make of it,” said Alcee.

Inspired by data demonstrating how men are largely underserved and underrepresented on college campuses, the Men’s Group attempts to bridge that gap by creating an outlet especially for them. According to a study conducted at the University of Penn State, men constitute only 36 percent of the population at counseling centers on campuses across the nation. This is parallel at Ramapo College, where CHCS also reports seeing significantly fewer men than women in therapy.

“At the counseling center, we see the similar trends that are going on in colleges across the country, which is that men are less likely to come for treatment as a whole,” said Alcee. “Then of course, men of color are even less likely.”

Multiple converging factors are involved in the low rates of male presence in therapy. The most prevalent factor, affecting everyone regardless of his or her gender, is the stigma about seeking counseling. The male population often considers therapy to be debilitating to the masculine image.

Unraveling the stigma requires a relearning of what psychology and therapy is about. Often times, the term mental illness alone can turn people away from counseling.

“It’s more about looking at life issues because everyone deals with stress, anxiety or has periods of sadness or depression,” said Alcee. “Getting the message out that counseling and psychotherapy is about becoming the best version of you and about becoming more fully human, that’s also helpful for men to see.”

Imbalance in the field, resulting in lack of representation, also heavily impacts a male’s decision to seek help. Research published by the American Psychological Association in 2011 reveals that the percentages of psychology PhDs awarded to men has dropped from nearly 70 percent in 1975 to less than 30 percent in 2008. This absence of male counselors distances men from therapy even further, making them feel unsafe exposing their vulnerabilities.

“Since the 1970s, there’s been a change in more and more women going into the job market and going into higher education, getting more graduate degrees. They have come to psychology,” said Alcee. “Also, because of insurance changes, psychology became less financially lucrative and men left.”

While men have inherent and real differences, early psychologist Carl Jung pointed out that humans are much more similar than they are different.

“Not only men, but women and the culture sometimes unfairly stereotypes men to not have the same type of range, depth or dimension as other groups,” said Alcee. “A lot of men do actually have these different facets but just have to find their way in to talk about it. It’s about learning to help men with their own language.”

Teaming up with Ramapo College Professor of Clinical Psychology Peter Heinze, Alcee presented at Fordham University in January about how to improve the campus climate with a particular focus on men.

“The general idea is to talk about restoring the balance. It’s important to have a healthy balance of yin and yang in the culture and men have a part of that,” said Alcee.

Heinze expressed concern about a dynamic where some students feel uncomfortable talking about certain sensitive issues such as race.

“We have actually created an environment that is not very academic,” said Heinze. “It goes against learning that people feel like their ideas are not accepted by either the professor or the students.”

Reversing this campus climate falls largely on the professors who have to set a model for the students.

“The answer is that professors have to be very understanding and open to the fact that not everybody is going to agree with all the ideas inside the classroom,” said Heinze.

The group therapy environment of the Men’s Group allows participants to explore these types of challenges they are faced with in their everyday lives.

For more information about the Men’s Group, or other CHCS programming, please contact Alcee at (201) 684-7522 or email him at malcee@ramapo.edu.